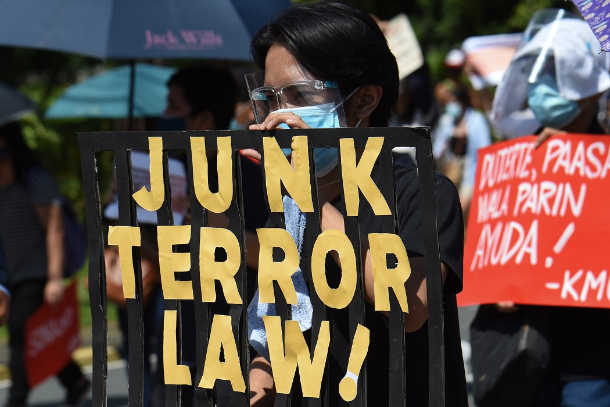 A protester carries a placard during a march towards the state university grounds in Manila on July 27, ahead of Philippine President Rodrigo Duterte’s State of the Nation address in Congress. (Photo: Ted Aljibe/AFP)

At least two policemen accosted churchgoers attending a Mass organized by religious groups and Manila Archdiocese at a church in the Philippine capital on July 27, according to witnesses.

Publicity material against a new controversial anti-terror law was seized during the tussle at Quiapo Church in the city center, they said.

Manila Archdiocese had organized the Mass for Peace and Justice attended by civic, government and religious leaders to pray for the State of the Nation address of President Rodrigo Duterte.

Manila apostolic administrator Bishop Broderick Pabillo was supposed to be the main celebrant but was not able to attend due to quarantine protocols after testing positive for the coronavirus.

His homily was instead read by Quiapo church rector Msgr. Hernando Coronel.

During the offertory, video footage showed two policemen approaching a group of churchgoers seated at the back of the church. They grabbed plastic bags that authorities later revealed contained posters and publicity materials against the anti-terrorism law.

“The bags contained placards and other materials but were not being raised nor used to cause any commotion. The policemen didn’t explain why they took the bags,” said Maricris Cabreros, spokeswoman of citizens' action party AKBAYAN.

Among the churchgoers were lawmaker Senator Risa Hontiveros, lawyer Howard Calleja and De La Salle Brother Armin Luistro, all vocal opponents of the new law which they say contains vague provisions that can be used by the authorities commit rights violations.

Hontiveros said police authorities should explain why they seized the publicity material.

“I told him [Manila police director Rolando Miranda] that we are expecting an explanation from them because people at the back of the church just brought the placards with them. They weren’t using them. I think they just brought them with them so they can go straight to UP [University of the Philippines to a rally] later. These people were not protesting inside the church,” said Hontiveros.

AKBAYAN said it would file charges against the policemen because government authorities may only seize private property through a search warrant issued by a judge.

Manila police director Rolando Miranda, however, said that it was a “judgment call” on their part to seize the material because two people began taking out a poster to disrupt the Mass.

“The police officers deemed it necessary to confiscate the material. These people were being disrespectful in a house of God,” Miranda said.

Miranda also said that AKBAYAN members did not violate any law but police decided not to return the seized items after the Mass.