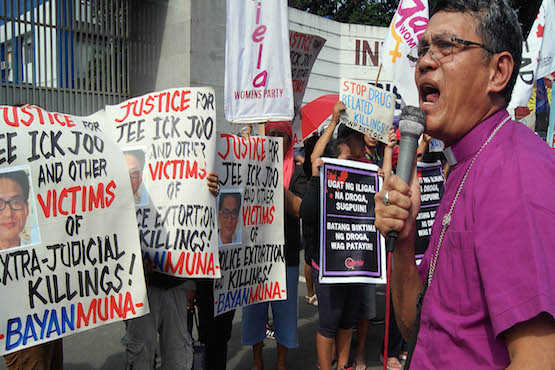 Human rights and church activists join a demonstration to protest rights abuses outside the gates of the national police headquarters in Manila on Jan. 27. (Photo by Mike Taboy)

The Philippine government and rebel peace negotiators failed to reach a bilateral ceasefire agreement at the end of talks aimed at ending almost five decades of communist insurgency in the country.

A joint statement released by the peace panels said "unilateral indefinite ceasefires remain in place" because of "issues and concerns related thereto."

A third round of talks between the government and the communist rebels ended in Rome on Jan. 25, four days after government soldiers and guerrillas clashed in North Cotabato province.

"The communities and ground units are asking for a bigger reason why we should still consider continuing the ceasefire," said Benito Tiamzon, a rebel peace negotiator.

Fidel Agcaoili, head of the rebel National Democratic Front peace panel, said the decision not to enter into a bilateral ceasefire with the government was approved by rebel leaders on the ground.

The rebel peace panel said it has received a proposed "interim" bilateral ceasefire deal from the government but it will have to be "seriously" studied.

In an eight-page statement at the end of the talks, both parties expressed that they have achieved "significant gains" in discussions on socio-economic as well as political and constitutional reforms.

Also discussed during the negotiations was possible free distribution of land to farmers.

The parties also signed an agreement that will allow a joint monitoring body to process complaints of human rights violations by both sides.

The possibility of giving amnesty to 392 political prisoners is also being studied.

The Philippine Ecumenical Peace Platform has earlier called for the release of political prisoners, especially the sick and the elderly, as a "confidence boosting measure" for the peace process.

Rein in the troops

Jigs Clamor, deputy secretary-general of the group, warned that armed clashes "will continue to happen if the government continues military operations amid the talks.

"These are obvious attempts to derail the peace talks," said Clamor.

He reiterated calls for a stop to counter-insurgency programs that "derail efforts to resolve the root causes of the armed conflict."

On Jan. 27, paint bombs were thrown at the police headquarters in Manila by activists decrying "police brutality and culture of impunity" allegedly perpetuated by the government.

"Rather than serve and protect the people, the police and military have intensified human rights violations," said Einstein Recedes, leader of the youth group Anakbayan.

The group condemned the military's alleged violations of its unilateral ceasefire.

Environmental group Kalikasan also called on the government to "walk the peace talks" by immediately implementing a common agenda on socio-economic and environmental reforms.

"[The government] should immediately get to work in implementing the common reform proposals of the talks," said Clemente Bautista, national coordinator of Kalikasan.

He said there are already at least 10 documented cases of "extrajudicial killings" against environment defenders in the seven months of the Duterte presidency.

The 47-year old communist insurgency in the country has already claimed an estimated 30,000 lives, according to the Philippine military.