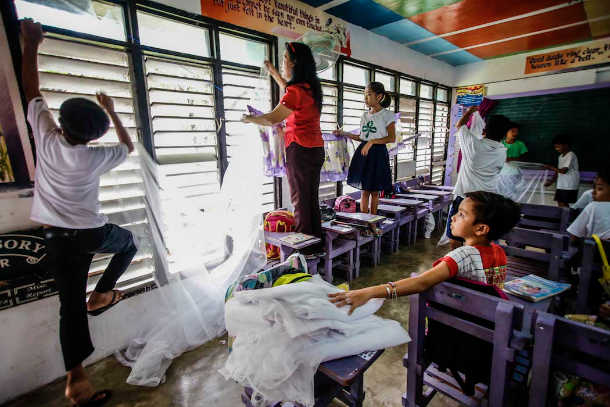 Pupils in a primary school in the northern Philippines install mosquito nets to prevent dengue-infected mosquitoes from entering their classroom. (File photo by Jojo Rinoza)

Catholic Church leaders in the Philippines have urged parishes nationwide to launch clean-up campaigns to prevent the spread of dengue fever.

The Episcopal Commission on Health Care of the bishops' conference made the call as the government declared a "national dengue alert" on July 15. The Philippine Health Department says dengue cases are rising rapidly in several regions following the start of the rainy season.

Health Secretary Francisco Duque said 106,630 dengue cases were reported from Jan. 1 to June 29, this year  — 85 percent higher than the 57,564 cases reported during the same period last year. "Let us clean our surroundings," said Bishop Oscar Jaime Florencio, a member of the Philippine bishops' health care commission. The prelate said parishes should particularly check holy water containers in churches. Bishop Florencio, who heads the Military Ordinariate of the Philippines, said everyone, including church people, should join hands to stop the spread of the potentially deadly virus. "I’m alarmed by the number of cases," he said. "What church leaders can do is tell people that viruses like this will not spread if we unite our efforts [in fighting them]."  He also called on people to check their homes for possible breeding places of mosquitoes. "The point is we help in whatever way we can whenever we are needed," he said. Although deaths due to dengue remain low with 456 deaths since the start of the year, the Philippine Health Department said the number should be lower. Dengue cases have been observed to peak in the Philippines every three to four years. The last peak occurred in 2016. In June, the World Health Organization issued a warning that dengue fever cases in Asia are expected to rise with the arrival of the rainy season. In Thailand, a dengue hemorrhagic fever epidemic has been declared after 28,785 patients were infected, 43 of whom died. Vietnam recorded over 67,000 cases of dengue fever and three deaths in the first five months of the year, while Cambodia registered 12,000 cases with 21 deaths. Singapore had 5,184 dengue cases including five fatalities, while Malaysia recorded 59,615 cases, including 88 deaths. Dengue is one of the fastest-spreading mosquito-borne diseases. Worldwide, the incidence of dengue has increased 30-fold over the past 50 years. Of an estimated 2.5 billion people at risk from dengue globally, about 70 percent live in Asia Pacific countries, according to the World Health Organization.