A young girl wearing a mask sits outside her home in Manila on March 18. The Philippines has ordered half its population of about 110 million to stay at home. (Photo: Maria Tan/AFP)

Local government authorities in the Philippines fear they cannot fulfill President Rodrigo Duterte’s promise to aid millions of locked-downed families on Luzon, the country’s biggest and most populated island.

Duterte earlier promised he would “take care” of all residents under enhanced community quarantine by instructing local authorities to deliver basic necessities to them.

However, some officials have already expressed doubts over whether they can fulfill the president’s promise.

“We only have a 30,000 peso (US$600) emergency-calamity fund. We already spent a huge portion of it when we bought face masks, hand sanitizers and thermal scanners. So, I do not know how or where we will get a budget for the president’s promise to feed our constituents,” said one local official who wished to remain anonymous.

“We do not even have enough money to finance our local health workers who are on the front lines. We do not have enough face masks. How can we afford food for people in our barangay?” one local councilor called Gerardo Larosa told UCA News.

A “barangay” is a basic local community in the Philippines. In Manila, each barangay is composed of 4,000 to 5,000 residents.

Several barangays are under total lockdown due to the spread of Covid-19. No one is allowed to leave their homes except health workers.

Some people, however, have prepared meals and sandwiches for the police and military at checkpoints. Others have offered to take health workers to work in their cars.

The Philippine army, together with the Office of the Vice President, has dispatched buses and trucks to designated areas around the capital to take doctors and nurses to work.

“This is a necessity. If we have fewer health workers who can go to work because there is no public transportation available, there is also less manpower in hospitals to combat Covid-19,” Marites dela Cruz, a nurse, told UCA News. 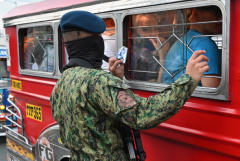 The Department of Trade and Industry has warned the public not to hoard basic necessities so that food may be “available to all.”

In a circular released by Sorsogon Diocese, Bishop Jose Alan Dialogo canceled “all public celebrations of the Mass, even if it means celebrating it with a few faithful, and other church-related gatherings.” The prelate also canceled funeral Masses, weddings, baptisms, confirmations and confessions.

As of March 18, the Philippines had recorded 202 Covid-19 cases with 17 deaths, according to government figures.