Indigenous youth demand the pullout of government troops from their mountain schools and villages. (Photo by Mark Saludes)

Troops are blocking aid to almost 2,000 indigenous people who fled their homes amid intensifying military operations against communist rebels in Mindanao last week, according to church officials in the southern Philippines.

More than 257 tribal families from 14 communities fled their mountain homes in the town of Lianga in Surigao del Sur province to an emergency center nearby on Nov. 26.

Father Raymond Montero Ambray of Tandag Diocese said food and medical assistance from church and aid groups were being prevented from reaching them.

"The military is also deterring ordinary people who want to bring food and aid to evacuees who are starving and sick," Father Raymond Montero Ambray of Tandag Diocese said.

Chad Booc, a teacher of the the Alternative Learning Center for Agricultural and Livelihood Development, said soldiers had set up roadblocks on mountain roads to Lianga, allowing only local government social welfare teams to deliver limited food supplies to the displaced.

Richmond Seladores, said a 70-person, multi-faith group on the way to aid the evacuees and participate in a nearby cultural festival Said the group spent hours negotiating for access to the evacuation center, but to no avail.

"The families have to make do with just five kilos of rice, two cans of sardines and two packs of instant noodles they received last week," the group said in a statement. "These are inadequate for each family's daily needs."

The army did not dispute the claims, but said they were preventing a "tactical evacuation" by suspected elements of the communist New People's Army in the region.

According to a military statement, rebels were trying to "attract local and foreign organizations to shield their leadership from being captured by security forces," following the termination last month of peace talks between the government and the communist political wing, the National Democratic Front.

"Government forces are monitoring all the actions of possible conspirators who could provide aide or support to this terrorist organization," the military said. 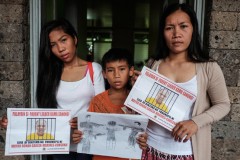 On Nov. 29, civilians, religious leaders and teachers of indigenous schools in the town of San Luis, in neighboring Agusan del Sur province, fled their communities after suspected attacks by paramilitary forces.

Voluntary teacher Michael Lumbian of the Rural Missionary of the Philippines Literacy Program said some 103 families in the town's six tribal villages have left since Nov. 16.

Paramilitary forces sprayed tribal people's homes with bullets on suspicion that they were either supporters of or New People's Army members, according to Manobo tribal leader Datu Makapukaw.

President Rodrigo Duterte announced last month that his government would go after activists, and groups running schools in indigenous communities, who the government thinks are conspiring with communist rebels.

The president tagged the rebels "terrorists" and "a bunch of criminals" after he declared an end to peace negotiations with the communist-led rebel group National Democratic Front.