Court asked to force president to reveal his state of health after making 'incoherent, unresponsive' statements Philippine President Rodrigo Duterte gestures during a press conference at the Malacanang Palace in Manila in November 2019. A lawyer says the public has the right to know the state of the president's health. (Photo: Ted Aljibe/AFP)

A lawyer in the Philippines has petitioned the country’s high court to force President Rodrigo Duterte to reveal the state of his health after accusing him of being “incoherent, unresponsive and unintelligible” while making recent statements.

Dino de Leon said the public had a right to know the state of the president’s health in case of serious illness.

The lawyer said he made the unusual move after noticing how “incoherent and unresponsive” Duterte was while making statements in recent press conferences about the government’s response to the coronavirus pandemic.

In one speech, Duterte said he would sell government properties like the Philippine International Convention Center if his administration runs out of money in the battle with Covid-19.

“Do we still have a psychologically and mentally healthy president? Is he still the one making decisions to manage and put an end to this current crisis?,” De Leon said in the petition.

De Leon also mentioned several occasions when the president was absent because of health reasons. He noted that Duterte had personally and publicly admitted that he is suffering from certain medical conditions such as Buerger’s Disease and spinal issues.

Buerger’s Disease is a rare illness where blood vessels become inflamed, swell and can become blocked with blood clots.

“The results of tests for Covid-19 conducted on President Rodrigo Duterte [and I] turned out to be negative. We are, therefore, fit and healthy to perform our duties,” the senator said.

De Leon, however, claims that Duterte has been rather “sickly and miserably incoherent” in public appearances during the enhanced community quarantine. 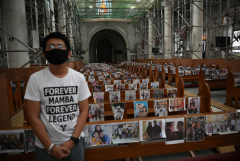 Meanwhile, the papal charity Aid to the Church in Need (ACN) has donated 280 million pesos (US$5.6 million) to the Philippine Church to help local churches in its efforts in fighting the coronavirus.

The money will be used by parishes and religious communities across the country in livelihood and medical response projects to help the poor who cannot afford hospital bills.

“It is our wish that this aid … will help ease the burden on our courageous religious, who stand on the front lines, bringing God’s love and compassion to our suffering brothers and sisters,” said Thomas Heine-Geldern, executive president of the charity.

ACN has been helping more than 145 countries for more than 67 years. It was originally founded to help displaced victims of World War II.

As of April 13, the Philippines had recorded 4,932 Covid-19 cases with 315 deaths, according to government figures.