Churches in the Philippines may have to close again as fears mount over the threat posed by the Delta strain of Covid-19. (Photo: Maria Tan)

Philippine lawmakers have joined calls for the government to act decisively to curb a rise in Covid-19 cases caused by the highly contagious Delta variant, including closing churches again.

Echoing a warning from a Catholic priest last week, Senator Nancy Binay said the country is now at a “tipping point” where the government and church officials should address the Delta variant.

On July 20, health authorities said they had detected 35 Delta cases in the Philippines.

The strain, first detected in India, is 50 percent more contagious than the original strain, according to world health bodies.

Churches in the Philippines reopened in July last year after closing for three months following the initial virus outbreak.

We need to regulate the number of people in enclosed spaces like shops, gyms, even in churches, as the Delta variant will spread quickly indoors

“We only have two options that the government must focus on. We implement strict border controls and regulate people’s movements in public places including places of worship,” Binay told ABS-CBN.

She said she was afraid that without proper precautions health workers may contract the virus despite being fully vaccinated.

“The Department of Health has to prepare for the possibility of our fully vaccinated healthcare workers acquiring the Delta variant. They are more prone to infection and can spread the virus easily within their families,” she said.

Senator Francis Pangilinan also said that maybe it is time for authorities to place the capital once again under enhanced community quarantine — the strictest lockdown status that also prohibits religious gatherings and other gatherings outside of homes. 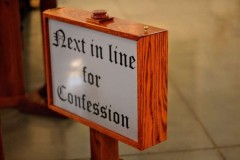 Filipino priests to confess in bid to end pandemic “What is important is that the people’s movement is monitored … We need to regulate the number of people in enclosed spaces like shops, gyms, even in churches, as the Delta variant will spread quickly indoors,” Angara told ABS-CBN on July 20.

“Our guiding principle must be what is essential. General rule: stay at home. Exception: Go out only for essential actives,” Pimentel said on Facebook.