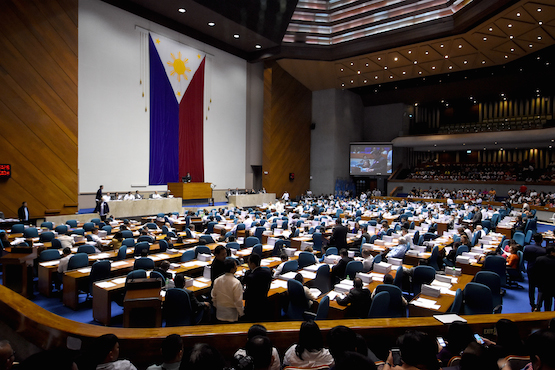 The Philippine Congress traditionally panders to the wishes of powerful presidents. (Photo by Angie de Silva)

The Philippines House of Representatives on Sept. 12, slashed the 2018 budget for the Commission on Human Rights to just US$20, sparking outrage among bishops demanding a halt to drug war killings.

The vote to essentially scrap the constitutional body's funding came as a tropical cyclone battered the main island of Luzon, killing 21 people.

Speaker Pantaleon Alvarez said Congress cannot abolish a constitutional body but did the next best thing.

"If it were up to me, I'd have given them zero budget," he said.

The vote on the commission's budget also occurred on the same day the bishops' conference issued its strongest denunciation yet of President Rodrigo Duterte's drug war, which has reportedly left about 12,000 people dead in just over a year.

"For the sake of the children and the poor, stop their systematic murders and spreading reign of terror! In memory of those killed, let us start the healing of our bleeding nation," Archbishop Villegas said.

"In the name of God, stop the killings," the letter said. "We are appalled by the remorselessness by which even the young are executed."

Expressing shock at the vote on the human rights commission's budget Auxiliary Bishop Broderick Pabillo of Manila said lawmakers had committed "a great insult to human rights and an affront to the constitution."

Archbishop Rolando Tria Tirona of Caceres, chair of the social action arm of the bishops' conference, called the lawmakers "stooges of the administration." Duterte, responding to criticism from officials of the government body in July, said he believed the commission was "better abolished."

Retired Bishop Pedro Arigo of Puerto Princesa said lawmakers are scared of the commission because they, too, have committed human rights violations.

"It is the power of money at work again. Justice and truth, which have the last say will catch up with them," Bishop Arigo said.

The group's deputy Asia director, Phelim Kine, said the vote is part of the government's efforts to block independent institutions from checking its abuses, especially in the context of the drug war.

Kine said that while the commission's performance as a constitutional body "may not have been fully satisfactory to many Filipinos, its mandate is important in combating human rights abuses."

"Instead of defunding it, Congress should increase its resources and ensure that it fulfills that mandate," said Kine.