Philippine lawmakers back down on child criminal bill

Oppostion forces legislators to try and set minimum age of responsibility at 12, not nine 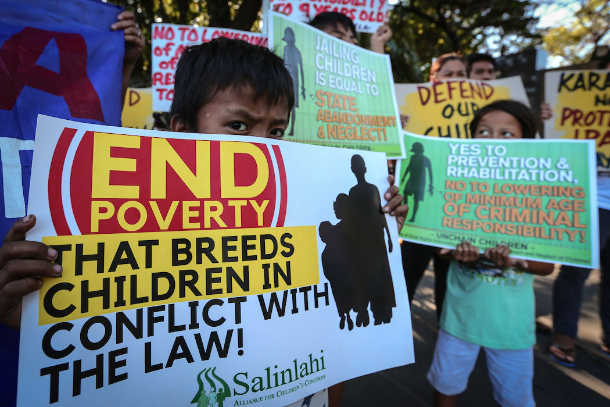 Children take part in a demonstration outside the House of Representatives building in the Philippine capital on Jan. 22 to protest the move to lower the minimum age of criminal responsibility from 15 years old to 12. (Photo by Jire Carreon)

Philippine lawmakers have been forced to make a compromise in their attempt to lower the minimum age of criminal responsibility amid fierce opposition from child rights advocacy groups and the Catholic Church .

The Lower House of Congress originally proposed to lower the age to nine years old, but reset the minimum age at 12 as a compromise after many legislators expressed "reservations."

Lawmakers approved a bill to set criminal responsibility starting at 12 years old during its second reading on Jan. 23.

The controversial measure is now only one step away from being passed in the Lower House.

"That is the [new] consensus," said Representative Doy Leachon, chairman of the House Committee on Justice that drafted the bill.

He said panel members on reflection thought "nine years old was too young."

Leachon assured that the new measure does not propose jailing children.

He said children in "conflict with the law" would be placed in "reform" centers under the supervision of the Social Welfare office.

The congressman denied the measure was anti-poor and ruthless, but was instead a "pro-children legislative measure."

If the bill is passed into law, it will also impose a six-month prison term for parents who do not undergo a mandatory intervention program for their erring children.

"Scientific studies suggest that the developmental immaturity of children must be considered and should mitigate their criminal culpability," he said.

"It is totally immoral and outrageous for the government to brand 12-year-old children criminals," Bonganay added.

He emphasized that the measure runs counter to proposals for the full implementation of a law that promotes "restorative justice."

"The move to lower the minimum age of criminal responsibility is a clear act of admission by the government that it has failed to provide services to children involved in criminal activities," he said.

An opposition legislator, meanwhile,  said the government should focus on addressing poverty instead of punishing children.

"You don't help victimized and marginalized children by branding them criminals and limiting their options as they are growing up," Carlos Zarate said.

House Speaker Gloria Arroyo said she is supporting the passage of the law because it is high on President Rodrigo Duterte’s agenda.

"It’s because the president wants it," said Arroyo. "From the beginning, my agenda is the president’s agenda," she added.