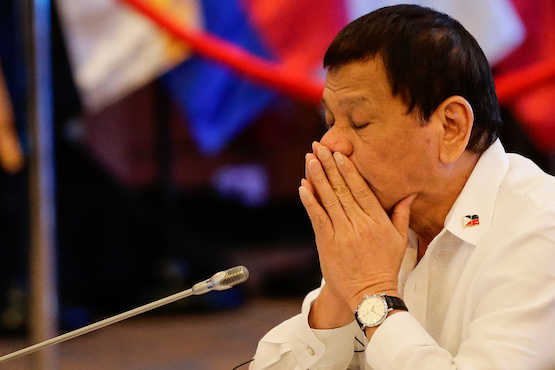 By By Mark Saludes, Manila

Evidence is emerging that the bloody so-called 'anti-drug war' of Philippines' President Rodrigo Duterte is radicalizing many Christians.

The militant Christians for National Liberation (CNL), comprising both majority Catholics and minority Protestants, is looking to reclaim its 1970s heyday.

Thousands of killings due to the government's anti-narcotics drive and counter-insurgency campaign have awakened passive radicals and progressives.

And as well as being a moral compass, both the clergy and the laity are starting to mobilize the faithful against oppressive state policies.

Duterte was elected as president in May 2016, in a landslide win after promising to tackle rampant drug abuse.

During his first few months in power, there was only muted criticism by major left-leaning organizations of extrajudicial killings of drug suspects.

Part of their rationale could have been that antagonizing Duterte would hamper then on-going peace negotiations and the release of imprisoned high profile communist leaders.

During the early "honeymoon stage" of the Duterte government, it was the Catholic Church that did not have a phase of harmonious relations.

As early as May 2016, Duterte criticized the Church hierarchy, calling bishops and priests "sons of bitches" and "hypocrites," after a few critical church leaders denounced the extra judicial killings.

The president even threatened to expose corruption and immorality among the clergy.

In November 2015, Duterte called Pope Francis a "son of a bitch" for causing massive traffic chaos during the papal visit earlier that year.

His apology to the pope via a letter received a positive response from the Vatican, but it did not end his tirades.

That kind of blasphemy particularly offended conservatives in the Catholic Church.

And Duterte's continued tirade against religious institutions spawned the seeds of disgust.

But in more recent times, even the institutional Catholic Church has been far less outspoken about the president.

Some bishops issued statements denouncing the killings, but not Duterte directly, for encouraging the murders of suspected drug offenders.

They were too afraid of what Duterte might do or say if they spoke out against his policies.

It has been the faith-based organizations, and a few priests and nuns, spearheading the crusade against the "war on drugs".

The initial response of the men and women of God to stand up for victims and promote human dignity is driven by the social doctrine of the church rather than political ideology.

However, exposure of Christians to the narratives of victims has opened a door for "revolutionary forces" within the Catholic and Protestant churches to re-introduce Marxist interpretation of doctrines.

Worsening human rights conditions are proving that Christian social doctrines and socialist ideology have much in common.

They share a passion for the plight of poor victims of abuses and, more broadly, for the basic right of the masses to life and equal protection of the law.

Carmela Adama, spokesperson of Christians for National Liberation, said that the drug-related killings were encouraging Christians to adopt a more radical interpretation of their theology.

Religious people such as nuns were coming out of their walled sanctuaries to be with the poor and oppressed, she added.

Adama said there had been an increase on the number of recruits from churches in the Philippines to the revolutionary movement since Duterte became president.

CNL is regaining strength and its role of bringing about social transformation.

Slowly, the militant group is reclaiming what it lost in the 1990s amid various schisms in the broad left of the Philippines.

During its 8th national congress in April 2017, members of the CNL engaged in some self-criticism over its slow-down in activity during the previous 14 years.

And, in a statement, the group stressed a need to address minimal participation and support by the church sector for "armed revolution" and the nation's democratic mass movement.

The formation of the CNL in February 1972 was in response to hardships of poor communities in the lead-up to the declaration of martial law in September of that year.

During the dark days of military rule, many Christian radicals went underground and took up arms alongside the communists.

In 1981, the CNL was recognized as the largest organization under an umbrella group of revolutionary forces, the National Democratic Front of the Philippines.

The engagement of church people in the revolutionary movement was driven then by deteriorating social conditions.

Now, history is set to repeat itself.

At present, the threat of a nationwide declaration of martial law, aside from the drug killings, is prompting church people to embrace militancy.

Activism in the church cannot be attributed to revolutionary forces such as CNL alone.

There is a natural realization among many people that they need to act against what they believe to be wrong.

Duterte is keeping his promise of change by acting as a catalyst for change in the Catholic and Protestant churches of the Philippines.

And many men and women of the cloth are moving to live the life of Christ by fighting tyranny.