Fishermen get ready to distribute relief goods from Jesuit-led organizations to tiny islets in the Bicol region. (Photo courtesy of Father Manoling Francisco)

The DReaM team has been Ateneo’s main engine for relief operations and rehabilitation work since Typhoon Ketsana hit the Philippines in September 2009. The typhoon affected 900,000 people, killing 250 and injuring 400.

The Jesuit groups announced that as of May 30 they had collected 103.4 million pesos (US$2,068,000) from benefactors who are mostly members and alumni of the university.

Jesuit Father Manoling Francisco, the founder of the Tanging Yaman Foundation, said their donors have funded five programs including food packs for the poor, personal protective equipment (PPE) for health workers and shelter for the homeless.

Father Francisco thanked them for making all projects possible in the spirit of generosity.

“We thank our generous benefactors, whose names have been gathered and placed on our altar and for whom we celebrate our Masses for thanksgiving,” he told UCA News.

Father Francisco said such efforts proved that the Church is alive through its partners and volunteers.

“United in faith in our Lord Jesus, we are the Church. We thank the Spirit of God for using and enabling us, the Body of Christ, to multiply the loaves and fish in order to feed the multitudes,” the priest said.

The groups also purchased 600 tons of rice, 65 tons of dried fish and more than 100 tons of vegetables from farmers and fishermen outside Manila and distributed them in more than 250 communities across the country. 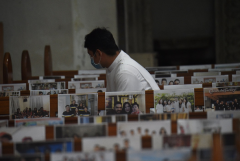 “We have included our Muslim brothers in our [relief] operations. We thank the Philippine air force for delivering the PPE to Mindanao,” Father Francisco said.

He said they have distributed 1,150 packed meals a day to feed medical health workers in seven Manila hospitals.

Amid so many deaths due to the coronavirus, he said he has desperately searched for God’s presence, finding it in poor parishes that divided and shared their donations to feed poorer families.

“I found him [God] also in doctor-friends, who despite their fear of contamination have continued attending to Covid-19 patients. Wherever generosity is, there God is. Wherever fidelity to one’s medical duties triumphs, there too God is,” Father Francisco said.