Workers wearing personal protective equipment move a body into a cremation chamber in Pasay City, Philippines, in May 2020. Officials on Panay say the island’s only crematorium is refusing to take more bodies. (Photo: AFP)

Authorities on one of the Philippines’ major islands says they need help dealing with their coronavirus dead after the only crematorium temporarily stopped accepting more victims after being overwhelmed by bodies.

Government and health officials on Panay island in the Visayas region said the number of bodies needing to be buried has risen sharply since the crematorium said it couldn't cope with the numbers on Aug. 3.

“Covid casualties are cremated within 24 hours, according to health protocols, to prevent further spread of the virus. Now we have a problem because the only crematorium here on the island has refused to accept the dead,” Iloilo City mayor Jerry Trenas told reporters on Aug. 4.

He said the crematorium had told health officials that it was being overwhelmed by the number of bodies it had to cremate.

Panay is the sixth-largest island in the Philippines with over 5.2 million inhabitants.

It is now struggling to contain a Delta variant outbreak after several tourists tested positive for the virus.

We cannot just bury Covid patients. We have a low water level, which means we might infect or contaminate our groundwater

Health experts say the island is recording at least 150 new cases of Covid-19 with three to five deaths per day caused by the Delta variant.

Trenas said mass graves are not yet an option because corpses may infect the island’s low groundwater level.

“We cannot just bury Covid patients. We have a low water level, which means we might infect or contaminate our groundwater,” he said.

“We are hoping for assistance from the Department of Health as our crematorium cannot handle the number of dead arriving from all parts of Panay.” 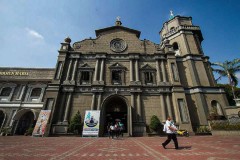 Government authorities, however, said bodies that could not be cremated had to be buried within 24 hours according to health protocols to prevent the spread of infectious diseases.

Father Romeo Libiran of Capiz Archdiocese appealed to Philippine President Rodrigo Duterte on Aug. 5 for more crematoriums on the island.

“Burying the dead should be the last of our options so as not to pollute our waters,” Father Libiran told UCA News.

He said that if the government can invest in hotels to attract tourists to enjoy the island’s fine beaches, such as the world-renowned Boracay beach, spending money on cremation facilities should not be a problem.