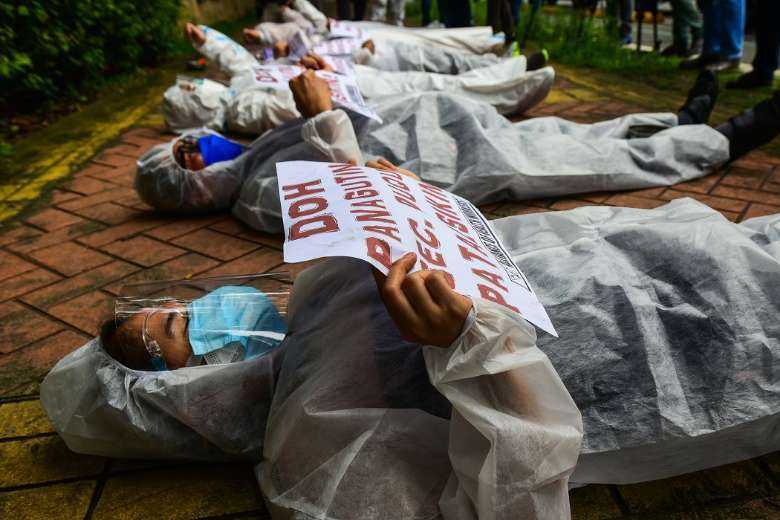 Health workers in protective suits call on the government to release their allowances amid rising Covid-19 infections in a protest in front of a hospital in Manila on Aug. 30. (Photo: AFP)

Health workers at 10 private hospitals in Manila staged a one-hour work stoppage on Aug. 30 to protest poor salaries, benefits and what they say is a lack of government support.

The walkout occurred while Philippine President Rodrigo Duterte was calling the health workers modern-day heroes in an address to mark the country’s National Heroes’ Day.

Duterte has previously defended police pay, saying he needed brave cops in the country “who are not afraid to die.”

Mendoza said Duterte’s speech calling health workers heroes was farcical because of the lack of social care they received from the government.

They should have given us our benefits last year. Why did they not do anything?

“The president calls us heroes. But when it comes to health, safety and benefits, we don’t receive care from him or the Department of Health,” Mendoza said.

The health workers said they staged the one-hour protest so as not to disrupt hospital operations while lives are on the line.

Meanwhile, another group of nurses said they would take further action until the government listens to them.

“There will also be mass action and protests on Sept. 1 for better benefits,” said Maristela Abenojar from the Filipino Nurses United group.

The nurses are looking for “promised” benefits such as special risk allowance, hazard pay and meal, accommodation and transport subsidies.

Abenojar said nurses doubt Duterte’s sincerity because of his lack of support for heath workers during the pandemic.

“They should have given us our benefits last year. Why did they not do anything?”  Abenojar asked.

Earlier this month Duterte ordered Health Secretary Franscisco Duque, to arrange payment for health workers who have not received their benefits. But health workers say they are still waiting.

Father Sandy Jeresano of Virac Diocese in Catanduanes province said government officials should have the decency to give health workers what was promised.

“Let us not steal what is allotted to them. Let us put an end to the culture of corruption in this country. It is also a way to end this pandemic,” he said.