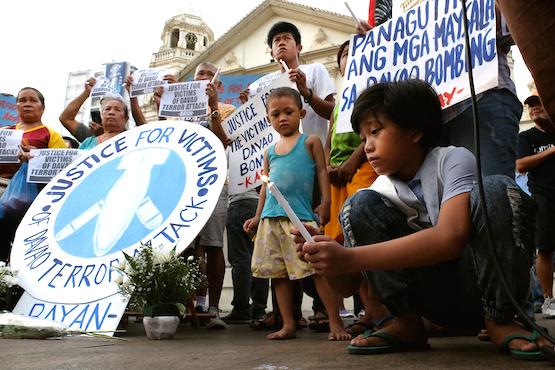 Activist groups take part in a candle lighting ceremony to call for justice for victims of the Sept. 2 bombing at a market in Davao City. President Rodrigo Duterte has declared a nationwide state of emergency following the bomb attack. (Photo by Angie de Silva)

Civil society groups in the Philippines have spoken out against a nationwide "state of emergency" following a bomb explosion in Davao City on Sept. 2, that left 14 people dead and 70 injured.

"We are concerned that its being indefinite and nationwide could lead to abuse of power by some elements of the police and the military," read a statement from the Movement for National Democracy.

The group said the declaration is "alarming" especially in the face of the spate of killings of suspected drug pushers and addicts.

"The [declaration] could be used to further justify more killings," the statement added.

The proclamation orders the military and the police to suppress all forms of "lawless violence" in the southern region of Mindanao and prevent it from spreading.

"It's a stepped-up campaign of the police and the military to ensure the safety of the general public," said presidential palace spokesman Kristian Ablan.

Auxiliary Bishop Broderick Pabillo of Manila also warned of the implications of the declaration, saying that "state-inspired" killings are also "lawlessness that has to be addressed."

About 2,400 suspected drug users and peddlers have been killed since Duterte launched an all-out war against narcotics.

The Promotion of Church People’s Response said it sees the state of emergency declaration as "an immediate and sincere response from the president to resolve security issues and prevent the spread of terror." "We understand why the president had to do this. It will be catastrophic if violence spreads throughout the country," said Nardy Sabino, the group's spokesman.

The group, however, urged authorities to put human rights first in the implementation of the president's order.

Sabino said the government should not only ensure the safety and protection of the people but also "advance the realization of all rights."

Father Ranhilio Aquino, dean of the Graduate School of Law at San Beda College, a school run by Benedictine monks, said there is no reason to be alarmed by the president's declaration.

"No rights are derogated. All rights remain in force," he said, adding that the declaration is "to ensure coordinated efforts and not let things get out of control."

The last time the country was placed under a state of emergency was in February 2006 after a foiled coup d'etat against former president Gloria Arroyo.

That declaration led to a temporary suspension of lower-level education classes and an immediate revocation on all permits to hold demonstrations and protests.

Arroyo lifted the state of emergency a week later.