A policeman stands guard at a checkpoint in Manila to enforce the coronavirus lockdown in the Philippine capital. (Photo: AFP)

The Philippine government, which has often been critical of the Catholic Church while President Rodrigo Duterte has been in power, has issued rare praise for all its efforts and donation drives to help the needy amid the coronavirus pandemic.

The Church’s efforts prove that it is responding to its call to be “servant of the people of God,” presidential spokesman Harry Roque said on April 27 in a national radio interview.

“We are thanking those [dioceses and religious congregations] who showed accommodation to stranded workers and frontliners. We also thank the religious and priests who give food to the needy. Thank you very much.”

He was referring to various efforts by dioceses across the Philippines to help the poor, particularly laid off workers. Church foundations and charity groups like Caritas have launched nationwide drives to cushion the effect of Covid-19 in various sectors.

It was rare praise for the Church, which has often come under attack from Duterte for criticizing his policies, most notably his war on drugs that has reportedly claimed thousands of lives.

Caritas has been providing relief goods and safety kits since the beginning of the lockdowns, known locally as enhanced community quarantines, in March.

In Sorsogon Diocese, priests have distributed fish bought from fishermen. Bishop Jose Alan Dialogo has baked bread by asking for flour donations from bakeries in the province.

In Kalookan Diocese, Bishop Ambo David has formed a group of laymen to provide counseling and company to those suffering as a result of Covid-19. Caritas Kalookan has also prepared meals and delivered them to slums in Manila.

Roque admitted that government aid was not enough, making aid from the private sector and church groups “essential” in the country’s fight against the pandemic.

“I encourage church leaders to coordinate with local government authorities so that those who want to help the needy may be given a quarantine pass. Your help is deeply appreciated. Thank you once again,” Roque said. 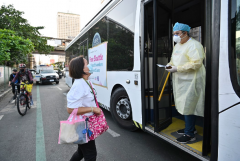 Meanwhile, Manila Archdiocese has released a pastoral letter called “Consecration of the Archdiocese to the Blessed Virgin Mary” that reminded Catholics of the many Marian feasts Filipinos will miss celebrating next month due to the lockdowns.

As of April 28, the Philippines had recorded 7,958 Covid-19 cases with 530 deaths, according to government figures.