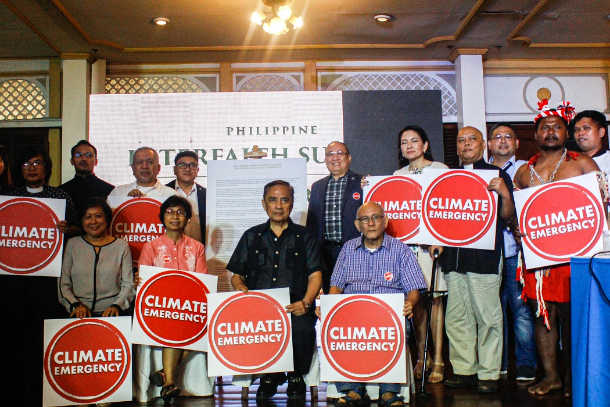 Leaders of religions and faith communities attend a gathering in Manila for discussions on the climate crisis. (Photo supplied)

Leaders of various religions and faith communities in the Philippines gathered this week in Manila for a landmark declaration of a climate emergency.

The groups called for a unified stand and action against what they described is a climate crisis caused by environmentally destructive human activities. Living Laudato si' Philippines, a lay-initiated climate movement based on Pope Francis’ seminal encyclical, led the first Philippine Interfaith Summit on Climate Emergency.The initiative aimed to raise awareness on the pressing realities of climate change through the eyes of local faith communities.The event provided a platform for faith, religious, and tribal groups to share and learn how different beliefs and traditions look at the morality and spirituality of caring for the "common home.""We must fall back on the common values and ethical standards that our religions teach us," said Emmanuel de Guzman, head of the Philippine government's Climate Change Commission.Addressing the gathering, De Guzman highlighted the role of religious communities in accelerating local climate action."Faith leaders play a critical role in shaping the mitigation, adaptation and resilience agenda of any nation as well as the global community," he said.Senator Risa Hontiveros, who joined the dialogue as a reactor, appealed for support for the enactment of a Rights of Nature Bill in the Philippines.Social development and advocacy network Philippine Misereor Partnership Inc. has been pressing for a bill that aims to recognize nature having its own legal rights just like humans.The proposed measure stressed urgent action to protect the natural ecosystem to prevent environmental degradation.On Nov. 23, faith-based groups signed the Philippine Interfaith Declaration on Climate Emergency.The document states that faith leaders need to influence decision-makers to produce more "eco-centric and people-centric" outcomes to inspire people to have a unified moral action on environmental issues."The declaration gives voice to the situation of the Filipino people and we hope stakeholders realize they cannot but respond when presented with it," said Rodne Galicha, executive director of Living Laudato si’ Philippines. "The best we can do is to act in solidarity with the vulnerable communities, and to act now,"