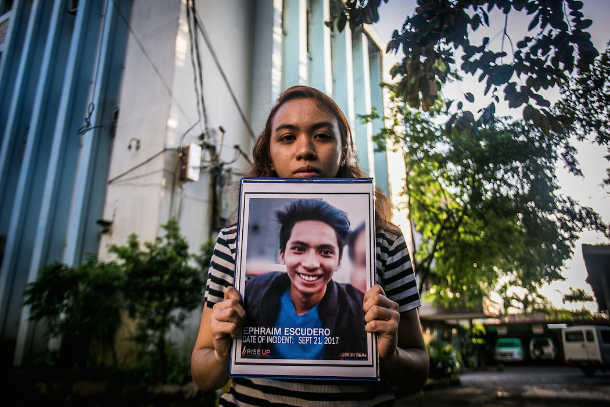 Sheerah Escudero, 22, holds a picture of her brother, Ephraim, a victim of drug-related killings in the Philippines. (Photo by Mark Saludes)

While Filipino Catholics visited the tombs of their loved ones on All Souls' Day, 22-year old Sheerah Escudero wished that she could talk to her brother for one last time.

She wanted to ask her brother, Ephraim, how he ended up dead. She wants to know who killed him.

Ephraim was found dead in Angeles City in Pampanga province, 121 kilometers from his home in San Pedro City in Laguna province, on Sept. 21, 2017.

He was 18 years old when he was killed, one of the thousands of victims of the more than 2-year-old "total war" being waged against illegal drugs by Philippine President Rodrigo Duterte.

In the evening of Sept. 19, 2017, Ephraim was last seen riding his motorcycle with 52-year-old Ronnie Pionilla and another unidentified passenger, in San Pedro.

Sheerah said that was the last time her brother was seen alive. His disappearance was reported to the police, but no one knew of Ephraim's whereabouts.

After two days and two nights, a police report was filed in the village of Balibago in Angeles City of a male body that had been found.

The body bore signs of torture and gunshot wounds, its face and head wrapped with packing tape, its wrists and ankles tied.

"It was the fifth day after his disappearance when we received the call," recalled Sheerah. After a four-hour drive, she saw the lifeless body of her brother.

There was no other lead to the case. There were no other witnesses, no evidence to point to the perpetrators of the crime. The case went cold.

A week after Ephraim's body was found Sheerah started looking for people who could help the family find justice.

It was then that she learned of Rise Up, a network of church workers, rights advocates, and families of victims of drug-related killings.

"I saw that we are not alone. I realized that my brother's case was not isolated," said Sheerah.

According to the Philippine Drug Enforcement Agency, at least 4,948 drug suspects died in police anti-narcotics operations from July 2016 to September 2018.

The Philippine National Police, meanwhile, recorded at least 23,518 "homicide cases under investigation" from July 2016 to June 2018.

Human rights groups have estimated at least 30,000 deaths since the government's campaign against illegal drugs started.

"These numbers are real. They have faces, names, and stories to tell. They are human beings, not just plain statistics. And it breaks me more," said Sheerah.

Rubylin Litao, coordinator of Rise Up, said the search for justice is not easy.

"We encounter dead ends because there are no witnesses or leads that could help pursue a case," she said.

"We are still grieving, but it doesn't mean I cannot stand to fight for somebody else's rights," she said.

There are a lot of things she wanted to tell her brother on All Souls' Day. "I [wanted] to tell him why his death will not be in vain," she said.

Redemptorist Brother Ciriaco Santiago, who has been documenting the impact of the government's war on drugs against the poor, said the families of victims get their strength not just from faith "but also from their suffering."

"We do stand for others because we can see ourselves in them. We can relate to their suffering, and we want to stop the pain," Brother Santiago said.

Sheerah lit light a candle for Ephraim on All Souls' Day and visited the families of victims of the killings.

"I am keeping the faith. I will remain for him and for all victims of injustices," she said.