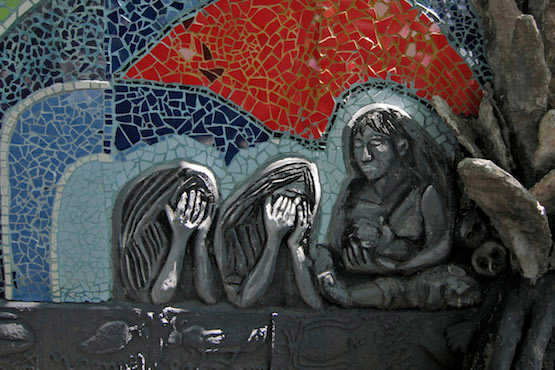 Part of a mosaic-mural being pieced together by families of victims of drug related killings portrays the anguish of women who lost their loved ones. (Photo by Vincent Go)

Theirs are shattered lives fragmented by the death of loved ones, a consequence of the Philippines' bloody war against drugs that has killed some 8,000 people.

As they try to form a mosaic outside a Catholic church in Manila, poor folk talk of broken dreams, fragmented relationships, and a seemingly hopeless tomorrow.

"Our lives were shattered like these tiles when my husband and son were killed last year," says Magdalena, not her real name.

She recalls that her loved ones were on their knees, begging for their lives inside their shanty in a slum in Manila's outskirts, when they were shot.

Magdalena is among family members of victims of drug-related killings who volunteered to piece together a mosaic-mural outside the shrine of the Our Mother of Perpetual Help in Manila.

She says she did not expect the church to come to her aid, especially because her family was linked to the illegal drug trade.

Like Magdalena, Maria, also not her real name, was helpless after masked gunmen killed her husband in February.

She was pregnant with her second child when the killers came.

The wake for her husband took almost a month because she could not raise the money to pay the morgue, where the body was stored, and the gravediggers.

She was already contemplating abandoning the body when Redemptorist Brother Ciriaco Santiago came to visit.

"Brother Jun," as the missionary is known to friends, has been documenting the government's war against narcotics and providing aid to families of victims.

Maria saw hope. After her husband's burial, she volunteered to help in putting the mosaic together.

"I learned a lot," she says, admitting that the artwork is helping her overcome the "desperate situation" she is in.

Now four months pregnant, she continues to come to the church every day, hoping to save enough from the meager allowance she receives for a new life for her and her children. Victims of human rights abuses are also portrayed in the mosaic-mural that is being pieced together outside the shrine of the Our Mother of Perpetual Help in Manila. (Photo by Vincent Go)

Joseph, not his real name, admits he used to be an addict who turned to selling drugs to sustain his addiction.

When President Rodrigo Duterte launched his war on drugs in July last year, Joseph's mother convinced the young man to surrender to authorities.

Joseph surrendered, but a few weeks later masked men came to his house to kill him. He was shot and wounded but was able to escape.

Going to the hospital for treatment was not an option. He had to operate and cut open his wound to remove the bullet "like in the movies."

He then went into hiding. An offer from Brother Jun gave Joseph a new lease of life.

Joseph underwent a livelihood-training program under the guidance of the Redemptorists and now works side by side with families who lost fathers, mothers, sons, and daughters to the drugs war.

"I realized how fortunate I am to be alive," Joseph says. He says he dreams of nothing more but to be with his family and to see his baby girl grow to be a woman.

Marianne too wants to turn a new page in her life after witnessing the death of her father during a "legitimate police operation" against suspected drug dealers last year.

"My father was on his knees begging for his life, and my younger brothers were hugging him to protect him, but the policemen dragged and kicked my siblings, and shot my father in front of them."

The policemen took away one of Marianne's brothers whose body was found the next day, hands tied behind his back, and with several gunshot wounds to the body.

One day Marianne was abducted. Her captors, believed to be policemen, wanted to know the whereabouts of her husband. When Marianne said she did not know, she was taken to a "safe house."

The abductors called the girl's family to demand ransom. The callers said if the family refused, Marianne would be charged with selling drugs.

The men grew impatient. One day, they took Marianne under a bridge and told her to call her family for money or they would not hear from her again.

The family had to borrow money and sell all their possessions to raise about US$800 to ransom Marianne.

She later sought refuge in the church. The art project, which includes art installations, is inspired by Pope Francis' encyclical on the environment 'Laudato si''. (Photo by Vincent Go)

The art project, which also includes art installations inspired by Pope Francis' encyclical on the environment Laudato si', has been a work in progress over the past two years.

In recent months, around 30 victims of the government's war on drugs have become "temporary workers" who receive about US$10 each time they come to work.

Brother Jun expresses hope that the mosaic will be a "reminder to people" of the importance of "caring for our common home because it depicts our history."

The mortar used to attach the tiles are made from the thousands of thanksgiving letters and letters of prayers that the shrine receives every week. The ground paper is mixed with sand.

"Laudato si' teaches us to protect the environment and to recycle," says Brother Jun. "The letters become part of the mosaic that will be immortalized in time," he adds.

The broken tiles were collected during a recent renovation of the church. People also donated broken tiles they had discarded.

"Like the tiles, we see our work as piecing the lives of these [victims of the drug war] back together again," says Brother Jun.

Aside from work, the Redemptorists also offer "psycho-social interventions," legal assistance, and counseling to family members.

"By just sharing meals and stories, they learn from each other," says Brother Jun.

"It will take time, but a simple thing as treating a person with respect and restoring their dignity can go a long way on their journey to recovery," he says.

"There is no clear sign when this madness will end," says Brother Jun. "The going will be difficult, but we will always find a way as long as we continue to hear people's cry for help."