Church says move is in response to all forms of killing, not just Duterte's war on drugs 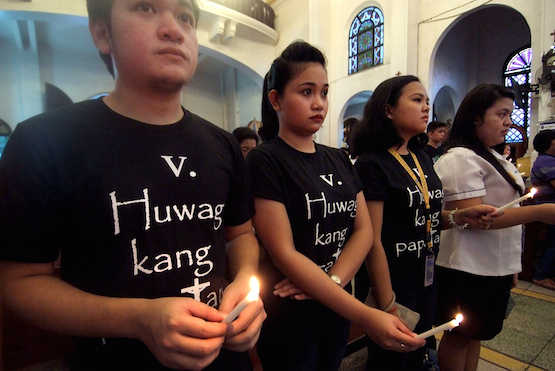 Parishioners in Manila wearing black shirts with "Thou Shall Not Kill" prints light candles to remember those who died in the government's war against crime. (Photo by Angie de Silva)

Several Catholic dioceses in the Philippines are putting up "Thou Shall Not Kill" posters and banners in parishes to remind Catholics to observe the Fifth Commandment.

Church leaders, however, were quick to clarify that they do not only refer to killings linked to the government's anti-narcotics war that have already killed at least 3,000 people since July 1.

At least 2,035 of the killings were classified by police as "deaths under investigation."

Archbishop Socrates Villegas of Lingayen-Dagupan, president of the bishops' conference, said the banners’ message concerns all forms of killings.

Parishes in the cities of Lingayen and Dagupan put up "Thou Shall Not Kill" posters to remind people of "the sacredness of every human life."

In the central Philippines, a "Thou Shall Not Kill" banner has been hanging outside San Sebastian Cathedral in Bacolod City since last month.

"This is a message for drug pushers, drug addicts, for the corrupt public officials, for those who promote abortion because these are all forms of killing," said Father Felix Pasquin, the cathedral’s rector.

The priest said the message was not directed toward any "specific person."

"While we agree that addressing drugs and criminality is an important government priority and a laudable goal, we are dismayed by the campaign's utter disregard for human rights, the rule of law, and due process," the group said in a statement.

The group said it is "lamentable" that the Philippine justice system "remains unresponsive in safeguarding and protecting the rights of the poor."

"We are alarmed that the president's order to 'shoot to kill' criminals and drug offenders resisting arrest seems to have been interpreted liberally by some members of the police force," read the group's statement.

The group also called on the president to reconsider his proposal to re-impose the death penalty. "There are no short cuts for achieving peace, security, and order, or for providing access to justice," the group said.