25,000 saplings represent estimated number of people to have died in much criticized Duterte campaign Government workers plant trees in the outskirts of Quezon City in the Philippine capital as part of an environmental protection campaign. (File photo by Robert Gines)

A diocese in the central Philippines is holding a tree-planting campaign to remember thousands of people who have died in a two-year government campaign against illegal drugs.

The planting of 25,000 trees, supposedly representing the number of deaths in the anti-narcotics war, will mark the start of the "Season of Creation" in San Carlos Diocese in Negros Occidental province next month.

In a pastoral letter issued on Aug. 13, Bishop Gerardo Alminaza of San Carlos noted that aside from threats of environmental disasters, the country faces a "growing number of people killed in the war on drugs."

The prelate stressed the need "to recognize that the commitment to work for justice and to preserve the integrity of creation are two inseparable dimensions of our Christian vocation."

Bishop Alminaza, said "the damage the war on drugs has had on the lives of people is irreversible."

In his pastoral letter, the prelate called on Catholics to become witnesses of faith "by taking bold actions to preserve the gift we share."

He said Christians are "stewards of God's creation" whose wellbeing is "interwoven" with the wellbeing of the environment.

Called the "Growing Trees for Life and Justice" campaign, conveners of the activity said the initiative is a response to a "call for justice both on behalf of nature and of people."

Catholics around the world will be observing the "Season of Creation," a global movement in response to Pope Francis' 2015 encyclical on the environment, Laudato si', starting next month.

The celebration will begin on Sept. 1 with a "Day of Prayer for Creation" and will run through Oct. 4, the Feast of St. Francis. 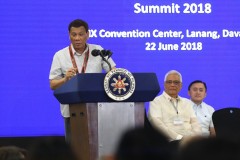 Augustinian Brother Tagoy Jakosalem, one of the conveners of the campaign, said the observance of the "Season of Creation" will allows Catholics to incorporate environmental concerns and actions into the "liturgical celebration and spiritual life."

"Our conversion on climate change and its impact becomes part of our conversion both on a personal and institutional level," he said.

Participants will plant trees in areas declared "ecological sites" and in communities to be chosen by the diocese.

The group Rise Up for Rights and Life, a faith-based organization that assists families of victims of drug-related killings, said, "disaster response is not limited to natural calamities."

"We are also called to respond to man-made calamities such as the war on drugs," said Carmelite priest Gilbert Billena, spokesman of the group.

"The church is always on the side of the poor who are victims of both ecological plunder and the bloody war on drugs," he said.

Yolanda Esguerra, coordinator of the Philippine Misereor Partnership Inc., applauded the campaign as an "effective measure to nourish the consciousness of the public about care for the environment and life."

She said that beyond the symbolic gesture of planting trees to show solidarity with victims of the killings, people are invited to "take a more active role in combating environmental and social injustices."

The Philippine National Police has reported that 23,518 murder cases were under investigation from July 2016, when President Rodrigo Duterte came to power, to June 2018.

Of that number, at least 4,279 involved drug suspects being killed during "legitimate police operations."