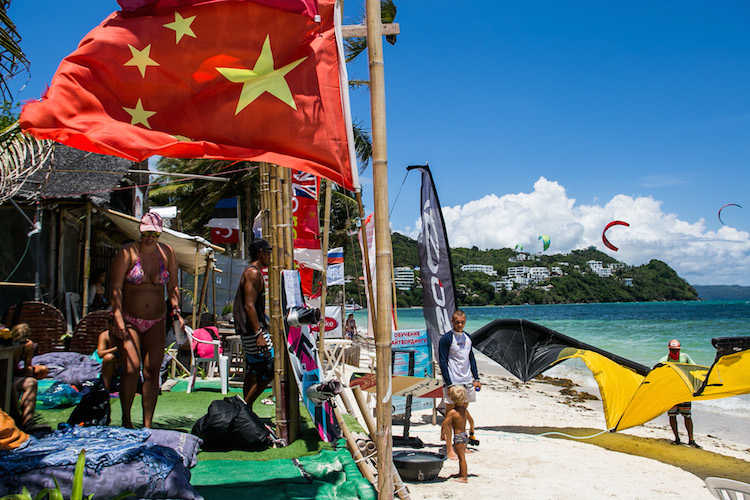 Tourists continue to arrive on Boracay Island days ahead of its scheduled closure from visitors on April 26. (Photo by Mark Saludes)

A central Philippine Catholic diocese has joined the growing clamor against the imminent closure of Boracay Island, one of the country's top tourist destinations.

The government has announced that it will close the island to visitors for six months starting April 26 to pave the way for its rehabilitation.

Boracay is known for its turquoise waters and powdery white sand. It has consistently ranked as one of the top tourist destinations in the world.

Tourism and development, however, have taken its toll on the island's environment. President Rodrigo Duterte even compared the island to a "cesspool."

"My orders were to clean it up. So when it's being cleaned, it's closed. There's one way in, one way out," said Duterte.

But several groups warned that the closure will displace thousands of people who depend on the tourism industry for a living.

"We are worried about the displacement of thousands of workers," said Father Emmanuele Mijares, spokesman of Bishop Jose Corazon Tala-oc of Kalibo.

Father Edgardo Encarguez said that instead of creating jobs, this "heartless and anti-poor action" will result in the loss of 30,000 jobs.

"Although there is a need to address the environmental problems in Boracay, it does not merit the arbitrary closure order," said the priest.

"It is like using a sledgehammer to kill a fly," he said.

At least 23 church weddings scheduled on the island will be affected by the closure, according to Father Tudd Belandres of the Our Lady of the Most Holy Rosary Parish in Boracay.

The priest said some of those who scheduled their weddings on the resort island were foreigners.

Father Belandres said the planned building of a mega casino might be behind the closure of the island.

He also said that the government "failed to present plans and programs on what to do during the entire six months" when the island is closed.

Duterte, however, announced of April 9 that he would declare the island a land reform area after the six-month rehabilitation period.

"Consider Boracay a land reform area. I will give it to the farmers, to the Filipino first," said the president, adding that the people will not gain anything from a casino.

Duterte said he would not allow the building of a casino even after a Macau-based company announced that it is putting up a US$500-million integrated casino resort on the island.

"Why would I give you a casino there? What will the Filipinos get out of it? Give it to the people who need it most," said Duterte.

Other top government officials also gave assurances that no casino will be built on the island.

"Boracay is already crowded. A casino may be located in [the mainland province of Aklan] instead," said Interior and Local Government Secretary Eduardo Ano.

The six-month rehabilitation of Boracay aims to fix the island's sewage system and roads and remove structures built in its forest and wetlands.