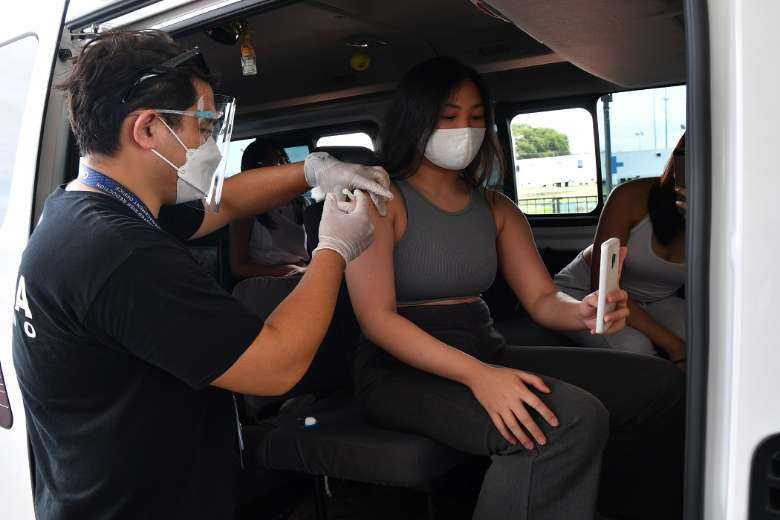 A health worker administers a dose of the BioNtech Pfizer Covid-19 vaccine to a resident at a drive-through vaccination center in Manila on July 31. (Photo: AFP)

A Manila diocese has warned unvaccinated people frustrated at being unable to travel to other parts of the Philippines due to anti-Covid restrictions not to buy fake vaccination cards in order to leave the capital.

Doing so puts the holder and others at risk of the virus as real cards are only supposed to go to those who have received two vaccine shots, Novaliches Diocese said in an Aug. 2 Facebook post.

Health authorities recently allowed those who had both shots and had received a government-issued card to travel outside the capital.

The card also exempts individuals from undergoing quarantine for 14 days in a state facility if they travel to another region.

Counterfeiters looking to profit are making authentic-looking vaccine cards and people may be tempted to buy them, especially during a strict lockdown imposed in and around Manila from Aug. 6-20, Novaliches Diocese said.

“Be wary of individuals selling vaccination cards. Our health is still a priority. Let us not do something illegal just to travel to see our loved ones. Let us sacrifice first for the common good,” the diocese’s post said.

Catholic churches are perfect places where criminals can sell the fake cards, it said, adding the diocese had received reports that some people were selling cards at Novaliches Cathedral.

The diocese also reminded churchgoers that vaccination cards are issued for free and cannot be transferred from one person to another.

Government authorities, meanwhile, told Filipinos not to travel to the provinces during the period of tighter restrictions and issued a warning over the fake cards.

"I am directing all police offices and units to be vigilant against those travelers who might use fake documents including vaccination cards to falsely prove that they are fully vaccinated," police chief Guillermo Eleazar told ABS-CBN.

Police have said the upcoming lockdown has seen many people trying to head back to the provinces to avoid being “trapped” in Manila.