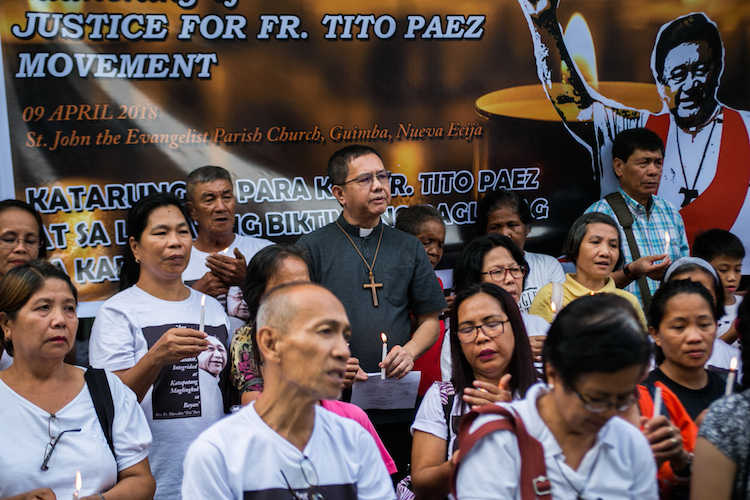 Philippine human rights and church groups launch a campaign on April 9 to seek justice for the killing of Father Marcelito Paez in December. (Photo by Mark Saludes)

A diocese in the northern Philippines has launched a campaign to seek justice for the killing of a Catholic priest in December and to seek an end to killings resulting from political and religious persecution.

Human rights and church groups gathered at St. John the Evangelist parish in Nueva Ecija province on April 9 to show their "collective struggle to testify and stand for the dignity and sanctity of life."

Bishop Roberto Mallari of San Jose said the formation of the "Justice for Father Marcelito Paez Movement" is part of the church's "search for the true meaning of love, which is justice."

"This day we deliver a strong message of our intense rejection and opposition to any forms of killing and injustice in our country," said the prelate.

He described the slain priest "not just an activist, but a revolutionary, who lived and died for the people, the country, and for the church."

Unidentified gunmen shot and killed Father Paez on Dec. 4 in Nueva Ecija after he facilitated the release of a political prisoner.

Police believe the priest was not the intended target but the "victim of mistaken identity."

"Mistaken identity or not, we believe Father Paez was killed because he was serving his people," said John Paul Paez, a nephew of the slain priest.

The 72-year-old Father Paez was a member of the Rural Missionaries of the Philippines board at the time of his death.

Sister Ellen Belardo, national coordinator of the missionary group, vowed to continue the advocacy work of the slain priest.

"We are seeking justice not only for the death of our priest but for the deaths of many Christians, church workers, peasants, tribal people and ordinary Filipinos because of social injustices," said the nun.

Bishop Deogracias Iniguez, retired prelate of Kalookan, said the campaign will also promote "just peace" and appeal for justice for victims of political and religious persecution.

"Every day there are one or two like Father Paez being harassed or killed because of the desire for a better life," said the prelate.

He said the campaign is a "wake-up call" especially for Christians "to defend life and immortalize those martyred defending life."

On March 16, the international pastoral aid organization Aid to the Church in Need recognized the slain priest as one of this year's "modern Christian martyrs."

In his message during the launch of the movement, Bishop Mallari called on the country's Catholic bishops "to renew, with enthusiasm, the desire to stop social injustices."

Father Paez was the 31st church worker to be killed since 2000, according to the ecumenical lay group Promotion of Church People's Response.

At least 14 Catholic priests, including Father Paez, have been slain since the 1970s at the height of martial law in the country.