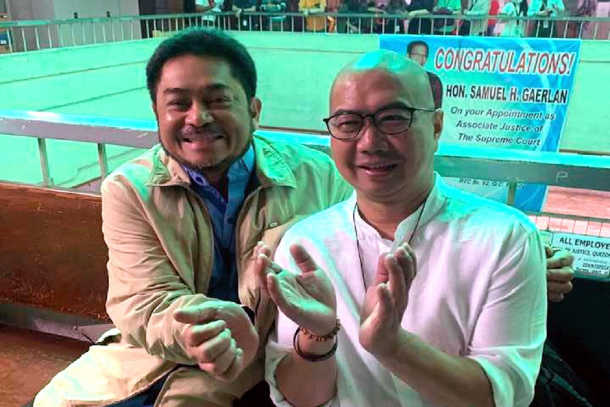 Filipino Jesuit priest Albert Alejo (left) and Father Flaviano Villanueva, a member of the Society of Divine Word, pose for the camera before posting bail on Feb. 14 following the issuance of warrants for their arrest. (Photo supplied)

A court in Manila has issued warrants for the arrest of two Catholic priests, a former senator and eight others for conspiracy to commit sedition.

The warrants for Jesuit priest Albert Alejo and Father Flaviano Villanueva, a member of the Society of Divine Word, were issued on Feb. 14. The two priests later posted bail at 10,000 pesos each (about US$200).Also ordered arrested were former senator Antonio Trillanes and several other individuals who were earlier linked to an alleged plot to oust Philippine President Rodrigo Duterte.The warrants stated that the accused "willfully, unlawfully and feloniously came to an agreement and decided to rise publicly and tumultuously, and to employ force, intimidation and other means outside of legal methods" against the president.The allegations said the accused circulated "malicious and scurrilous libels and [fabricated] evidence against [Duterte] and his immediate family members, making it appear that the president and his family are engaged in a drug trade syndicate."Father Alejo, the founder of an anti-corruption campaign called Ehem!, and Father Villanueva, who manages the Arnold Janssen Kalinga Center that provides food and hygiene care for the poor in Manila, denied the accusations.Authorities earlier dismissed charges against four Catholic bishops who had been accused of involvement in the plot.The Department of Justice later concluded that the bishops showed no intention of committing sedition and that the complaints filed against them by the police lacked evidence.Cleared of sedition charges were Archbishop Socrates Villegas, Bishop Pablo Virgilio David, Bishop Honesto Ongtioco and Bishop Teodoro Bacani, retired prelate of Novaliches.Charges against two other priests, Father Robert Reyes and La Salle Brother Armin Luistro, were also dismissed.The sedition case and other charges stemmed from a viral video accusing Duterte and his family of links to the illegal drug trade.The bishops' conference earlier described the charges against the church people as "beyond belief."The Justice Department said there were "interlocking pieces of proof" that provide a "complete picture of a grand conspiracy."The so-called conspiracy allegedly aimed to create "hatred or revenge" against the president and his family "with the end view of toppling and destabilizing the current administration."The charges were filed last year against more than 40 people, including the country's vice president and 35 members of the opposition.The complaint noted that the accused conspired to spread "false information" against Duterte’s family and administration officials.It also said they were looking to "agitate the general population into staging mass protests with the possibility of bringing down the president."A person called Peter Joemel Advincula claimed in a video and at a media briefing that Duterte’s son, Paolo Duterte, and presidential aide Bong Go were involved in drug syndicates.He was later presented at a police media briefing where he claimed that the country's vice president and opposition members and several church people were behind a plot against the president.Advincula was among those indicted for conspiracy to commit sedition, despite his being the primary police witness.Former senator Antonio Trillanes, Fathers Alejo and Villanueva and the several other individuals with warrants now out against them were accused of producing Advincula's video.