More than 6,200 people have died in former president Rodrigo Duterte's anti-drug campaign, according to official figures 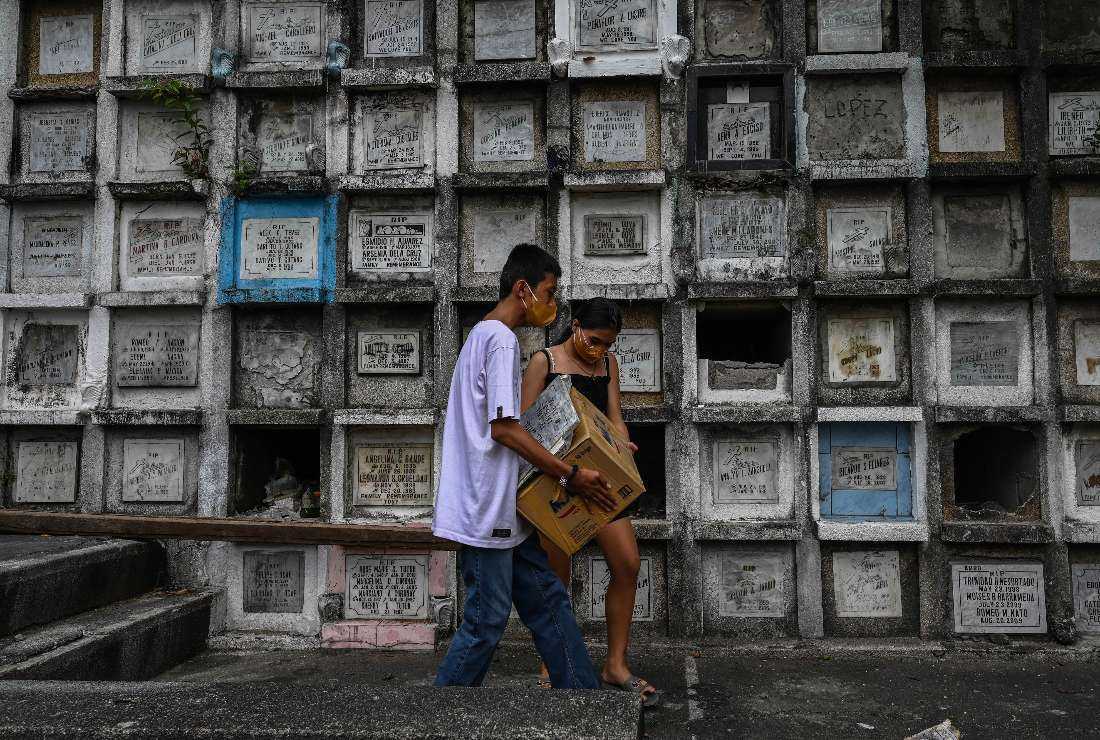 Relatives of a victim of the government's drug war carrying a box containing the remains after they were exhumed at Bagbag Cemetery in Novaliches, Metro Manila on June 10. (Photo: AFP)

A Philippine police officer has been jailed for torturing two teenagers killed at the height of former president Rodrigo Duterte's drug war, court documents show, in a rare conviction of an enforcer of the crackdown.

During his six-year term, which ended in June, Duterte openly ordered police to shoot dead drug suspects if officers' lives were in danger.

More than 6,200 people died in his anti-drug campaign, according to official figures. But rights groups estimate the true figure was in the tens of thousands.

The crackdown was widely condemned and sparked an international investigation but only three policemen have been convicted for killing a drug suspect.

A Manila court found earlier this month that police officers Jefrey Perez and Ricky Arquilita tortured two teenagers in 2017. The officers also planted a weapon and drugs on one of the victims.

The teens -- Reynaldo De Guzman, 14, and Carl Arnaiz, 19 -- were later killed by the same officers, the court said.

However, murder charges filed against the officers were withdrawn because they were submitted in the wrong jurisdiction.

Perez was jailed for life for planting evidence and given a minimum sentence of 20 years for torture, according to the court ruling, which was released Wednesday and seen by AFP.

Arquilita died during the trial.

The police officers denied the charges.

The officers claimed in the case involving Arnaiz they had tried to arrest him on suspicion of robbery but shot him dead when he resisted.

The teenagers were last seen together on the evening of August 17, 2017.

Hours later, a witness saw a police car parked on the side of a road. He watched as a handcuffed Arnaiz got out of the vehicle, knelt down, raised his hands and shouted "I will surrender" before Perez shot him.

The body of De Guzman was found weeks later north of Manila. It had dozens of stab wounds.

"Without a doubt, the contusions and abrasions found in the various parts of the victims' body caused severe pain and exhaustion upon them, before they were eventually killed," the court said.

'Drop in the bucket'

Rights groups welcomed Perez's conviction but Amnesty International said it was a "drop in the bucket considering the about 30,000 cases of killings in the War on Drugs".

"We can only hope the courts deal expeditiously on other cases," Conde told AFP.

President Ferdinand Marcos, who succeeded Duterte, has vowed to continue the drug war but with a focus on prevention and rehabilitation.

But Azurin insisted that "as much as possible" police tried to avoid killing suspects.

Under pressure from the UN Human Rights Council and the ICC, the Duterte government began examining hundreds of cases of drug operations that led to deaths.

The effort is still underway and 25 officers have been charged, Justice Secretary Crispin Remulla said this month.