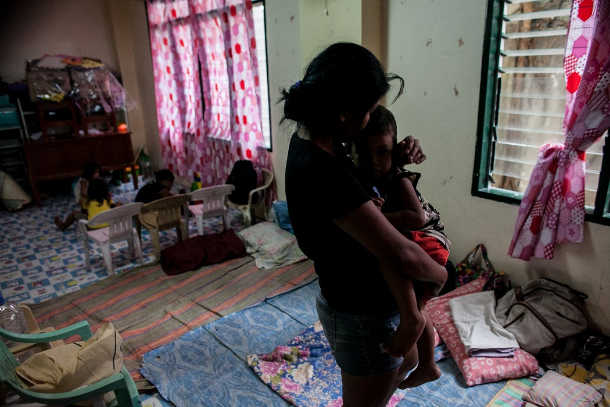 Residents gather inside an evacuation center as they brace for Typhoon Kammuri in Albay province on Dec. 2. (Photo by Basilio Sepe for Greenpeace)

Several churches in the Philippines have opened their doors to thousands of people seeking shelter from a powerful typhoon that is expected to hit the country this week.

In Albay province, at least 106,211 people living at the foot of Mayon Volcano have already been evacuated due to threats of floods, landslides, storm surges and strong winds. An estimated 70,000 people in other parts of the Bicol region have also sought shelter in schools and churches for fear of heavy rainfall brought by Typhoon Kammuri.

The government's Office of Civil Defense said it expects the number of people seeking temporary shelter to increase in the coming days. Most of the affected families come from areas that are at serious risk of flooding, mudflows and landslides. Bishop Joel Baylon of Legazpi announced that churches and pastoral halls will be used as evacuation centers as Kammuri barrels down on the Philippines.

"Let us also join our government agencies, especially those in charge of disaster risk reduction and management, in helping keep our parishioners safe."  Archbishop Rolando Tria Tirona of Caceres invited the public to join in prayers "for the safety of everyone." In the central Philippines, the Social Action Center of Kalibo Diocese has deployed teams that specialize in assisting children and pregnant women. "They are also coordinating with the [government's social work office] for the availability of relief goods and other basic services," said Terence Toriano of the local disaster office. "Based on monitoring, street flooding can be the least that could happen in our town," he said, adding that volunteers are prepared for all eventualities. The state weather bureau said the typhoon was expected to make landfall in the Bicol region, specifically in the provinces of Sorsogon, Albay and Catanduanes, late on Dec. 2. The typhoon is packing winds of up to 150kph and gusts of up to 185kph. Typhoon Kammuri is the Philippines’ 20th typhoon this year.