Attacks on rights defenders, agents of the Church in Negros province are not new and are 'expected' prelate says 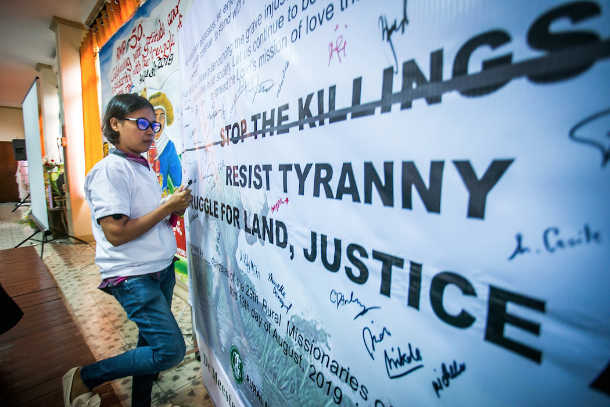 Zara Alvarez, a church worker from the province of Negros in the central Philippines, signs a manifesto signifying her commitment to work for human rights. (Photo by Mark Saludes)

There is no stopping Zara Alvarez, a church worker in the central Philippine province of Negros. Even the threat of death does not faze her.

Zara, a mother who loves to explain heaven and hell to her 7-year-old girl, works for the Church-Workers Solidarity group in San Carlos Diocese. Her work brings her to the peripheries where farmers who fight a daily struggle to survive live in a place that can only be described as hell on earth.

Many of the 87 farmers and human rights activists killed by gunmen in the province over the past two years were Zara's friends. On Nov. 6 last year, she was on the road when she learned that human rights lawyer Benjamin Ramos had been shot dead. Five months later, while in bed suffering from pneumonia, Zara received a message informing her that another friend, town councilman Bernardino Patigas, had been killed. She described both men as being "among the few people who were willing to extend their arms whenever we needed help in assisting human rights victims." Their killings hit Zara hard. She wanted to question God, but there was so little time to grieve. She had to pick herself up and assist the families of “extrajudicial killing victims.” Death comes knocking Hell broke loose for Zara again last month when at least 20 people were killed in the province known as the country’s sugar bowl for its vast sugarcane plantations. "Every time my phone rang, I know someone had died," she said. But the most chilling message she received was not about someone else’s death, but a threat to her own life. On July 20, the office of human rights group Karapatan received an anonymous phone call. The caller told the Karapatan staff member who answered the phone that Zara Alvarez was the next target “and then we’ll get rid of all the members of the National Union of People’s Lawyers." "I just don’t know the specific date, but it will happen this year," added the anonymous caller. The National Union of People’s Lawyers volunteer their services to victims of human rights abuses and other cases involving people who cannot afford a lawyer. Because of its work, the organization has been accused of having links with communist rebels. Zara was advised to find a safe place to stay. "I cannot leave everything behind while everyone I know is being killed," she told ucanews.com. She said she is afraid, not only for herself but for her daughter and her family. "Fear and anxiety have attacked me a few times," she said. The bitterness of sugar The killings in Negros province center on a struggle by poor farmers for their own land. The daily minimum wage for an agricultural worker ranges from US$4.66 to US$5.71 during the planting and harvest seasons. But workers' union leader Antonio Flores said the actual daily wage, after deductions, only amounts to between US$1 and US$3. "It goes even lower during the dead season when thousands of poor farmworkers are left with nothing but sugarcane pulp," said Flores, secretary-general of the Union of Agricultural Workers. Landowners prevent farmworkers from cultivating the land after the harvest and wait for the next planting season. Several peasant groups have tried what they call bungkalan, or the collective tilling of idle land for short-term cash crop cultivation. Some of these activities have ended in tragedy. On Oct. 20, 2018, gunmen killed nine farmers, including four women and two children, during a bungkalan activity in the town of Sagay. Authorities blamed the rebels, but the Negros Federation of Sugarcane Workers claimed the killers were henchmen of the landlord. Like in other parts of the country, the root of the conflict in Negros is the "absence of justice, landlessness, and inequality," said Flores. In 2018, the Department of Agrarian Reform reported that about 600,000 hectares of land nationwide under the Comprehensive Agrarian Reform Law remain undistributed to landless farmers. In Negros, about 125,000 hectares of sugarcane plantations that have been subjected to the government's land reform program remain in the hands of landlords. Church mission continues Zara said that despite the threats those who work with the farmers cannot just lock themselves away from danger "because the pursuit of justice has to continue." "Receiving death threats has already become one small part of our work," she said. Bishop Gerardo Alminaza of San Carlos said attacks on church workers in his diocese "are not new" and "are even expected." "Anyone who chooses to be prophetic and follow Christ’s works should be aware and prepare for the consequences," said the prelate. Bishop Alminaza, who heads the Church-Workers Solidarity group in his diocese, called on church workers and human rights defenders to keep their eyes on their vision or goal despite the threats. "We cannot allow this persecution and these attacks to deter us from following the Lord," he said. The prelate lauded the efforts and sacrifices of church workers. "We thank the Lord for the courageous witness of many church people for all these years on behalf of justice and peace," said the bishop.