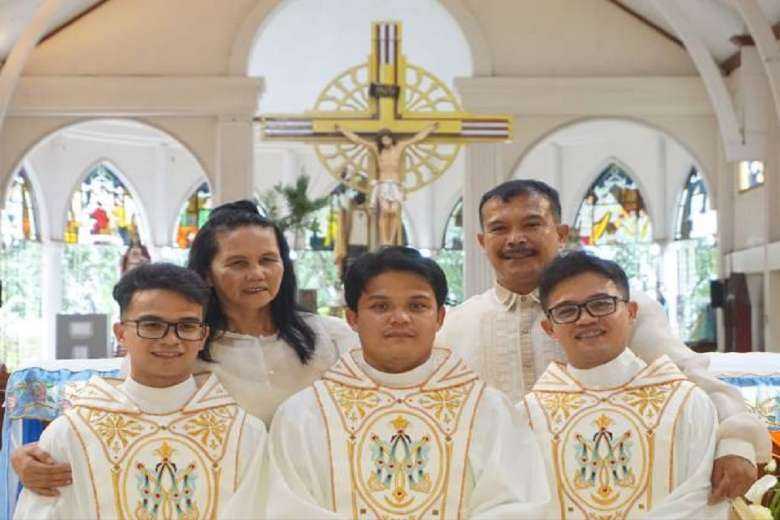 From left: Jerson, Jessie and Jestonie Avenido with their parents after their ordination in Cagayan de Oro on Sept. 8. (Photo supplied)

An ordination ceremony in the Philippines’ Mindanao region proved to be a real family affair when three brothers were ordained into the priesthood at the same time.

Jessie, Jestonie and Jerson Avenido, members of the Sacred Stigma of our Lord Jesus Christ congregation, an Italian order, were all ordained priests by Archbishop Jose Cabantan of Cagayan de Oro on Sept. 8.

The ceremony took place at the Saint Augustine Metropolitan Cathedral in Cagayan de Oro City, drawing praise from Catholic organizations across the country who said three brothers entering the same religious order and being ordained at the same time was an extremely rare, if not unprecedented, event.

Archbishop Cabantan said he had never ordained three brothers into one congregation before.

The Knights of Columbus in Virac Diocese called it “unprecedented and a gift to the Catholic Church.” They also praised the family of the brothers, thanking them for the special gift to the Church.

The new priests' father is a farmer and security guard while their mother is a babysitter. “It is a blessing to have a priest in the family, but three is special,” they added.

Although they were ordained together, the Avenido brothers’ journey to the priesthood were separate, with the eldest, Jessie, 30 entering a seminary in 2008 followed by Jestonie, 29, and Jerson, 28, in 2010.

None, however, had originally set their sights on a religious vocation.

“We did not come from a rich family but we are very rich in our love for the Lord and his Church,” said Father Jessie Avenido after the ordination ceremony.

Altar servers in Santa Cruz Parish in Manila said they were inspired by the Avenido brothers.

“Their story is inspiring. We hope some of our group can enter the seminary with our siblings. Some of us have brothers who are altar servers here in the parish,” acolyte James Vedan told UCA News.

The newly ordained priests said their vocation was the product of the hard work and prayer of their parents.

“We have chosen this vocation neither by chance nor force but of our own free will,” they told Catholic-run Radio Veritas.

They also revealed they have a younger brother who is also considering the priesthood.

“He is very active in the parish. We would not be surprised if he also enters the seminary. If he does, it will be by the grace of God. We will thank the Lord for giving us four priests in the family,” they said.

ANSELM BARETTO
The good Lord blessed this family n may He guide them throughout their life. Alleluia.
Reply

HILDA
Congratulations dear Fathers and the proud& happy parents. May God continue to bless you and shower the parents with his m8ghty bkessings.
Reply

REV. FR. SELVARAJ PETER
Praise The Lord..Be assured of my prayers and I recommend myself to your prayers.