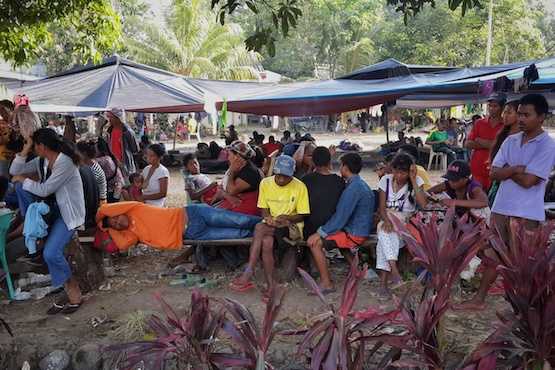 Some 3,000 farmers and tribal people seek shelter inside a Methodist church compound in the southern Philippine city of Kidapawan. (Photo by Vincent Go)

Philippine authorities have threatened to close a Protestant church compound in the southern city of Kidapawan in Cotabato province for providing sanctuary to protesting farmers and tribal people.

Some 3,000 protesters have sought refuge in the compound after three protesters were killed, 116 were wounded, and 89 reported missing when policemen dispersed some 6,000 farmers and tribal people who blocked a major highway in Cotabato on April 1. The protesters were seeking government help to get them through an ongoing drought in the region.

The government warned it could revoke the business permit of the United Methodist Church for "harboring the leaders and members of illegal demonstrators."

Mayor Joseph Evangelista of Kidapawan City also demanded that the Methodist church explain within five days why the church's permit should not be revoked.

"Please be informed that your action of harboring these protesters is punishable by law," read the governor's letter.

"We might … take legal action against you unless you cooperate with us in addressing the issue formally and legally," it added.

On April 2, policemen searched the church compound for weapons allegedly used by the protesters.

Imperative to protect the poor

Meanwhile, the United Methodist Church has issued a "pastoral statement" signed by bishops of the three episcopal areas in the country.

It is "an imperative of our faith to care for the weak and the poor especially during crucial moments when they are being beleaguered by the powerful and the mighty," the statement said.

The Methodist bishops also condemned the "flagrant and vicious use” of live ammunition to disperse the farmers.

"No justification exists for this murderous and terror-inducing act," they added.

"By offering our sanctuary, we are not just being hospitable to our farmers and hungry ones, but we are making them as one amongst us. ... By offering them our sanctuaries, we recognize their suffering and hopes, their struggles and aspirations," the statement said.

Calls to protect the church

The ecumenical group Promotion of Church People's Response has called on people in Mindanao "to protect the Methodist Church and the people seeking refuge there."

Bishop Ephraim Fajutagana, head of the Philippine Independent Church, called on Catholic and Protestant bishops and priests to "open cathedrals and churches to shelter farmers who suffer state persecution."

Auxiliary Bishop Broderick Pabillo of Manila, called for accountability and punishment for those behind the violent dispersal of protesters.

"This is not mercy but cruelty, committed in the Jubilee of Mercy," said the prelate.