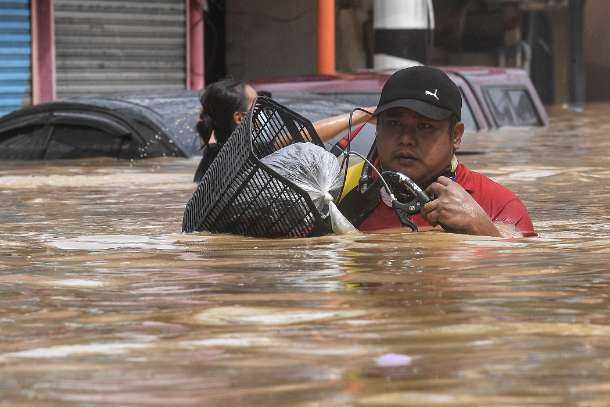 A resident carries his bicycle as he makes his way through a flooded street to shelter after Typhoon Vamco hit Marikina in suburban Manila on Nov. 12. (Photo: Ted Aljibe/AFP)

A Catholic foundation has given relief aid to victims of Typhoon Vamco that killed at least 25 people, forced hundreds of thousands to flee their homes and brought the worst flooding the Philippines capital has experienced in years.

The typhoon slammed into the Philippines on Nov.12, a week after Super Typhoon Goni ravaged the country.

In Manila, Vincentian priest Father Dani Pilario said urgent help should be given to illegal settlers living in shanties under bridges because they could be trapped by flooding caused by heavy rain that saw a river in the Marikina area of the metropolis rise by a meter in less than three hours.

“The most vulnerable and affected during floods and rising water levels are people living under bridges,” Father Pilario said in a social media post.

The flooding is being made worse by full dams releasing water or overflowing, creating strong currents, the priest said.

Many people were unaware this was happening, he added. As a result, “these human beings under bridges can easily be trapped or washed away altogether.”

President Rodrigo Duterte said on Nov. 12 that he had ordered government agencies to mobilize and provide aid to victims.

“Rest assured, the government will not leave anybody behind,” Duterte said on national television.

For some, help did not come fast enough. One Manila resident said she and her family waited for hours on their rooftop before a boat came to their rescue.

“We waited, trapped for almost four hours. We could not swim because the current was so strong. All we could do was to hold on to our roof and pray that someone would come for us,” Marikina resident Geraldine Datiles said in a radio interview.

Father Pilario said he was surprised to see illegal settlers living under bridges with smiles on their faces after the typhoon.

“When we visited them today [to give relief goods], they looked so relaxed and said, ‘We already know what to do, Father. We have already learned. We have been here for a long time,'” he said.

However, Father Pilario said that although that this might be the case, they too had their limits.

“When a government does not have a housing program which forces families including children — a lot of children — to live in such circumstances, then this society is abusing people’s resilience,” he added.

The priest questioned how a  government could not provide shelter to such a big slice of society and show more care for its people, especially during natural disasters.

“If [a government] only cares for itself, for its own survival in power, then the people, whom it promised to serve with all the resources at its disposal, are left to survive [or die] on their own. We should call for accountability. Enough Is enough,” he said.