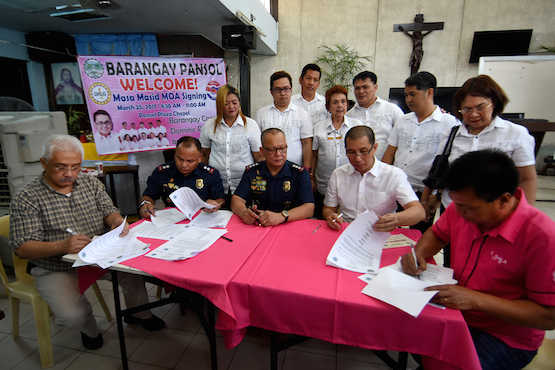 Church and community leaders in the village of Pansol in Quezon City sign an agreement of cooperation in the fight against illegal drugs on March 25. (Photo by Angie de Silva)

Shirtless men engage in casual chatter in street corners, mothers cradle their infants in the alleys, while children run around the narrow streets of a village in the Philippine capital Manila.

Boredom is a common enemy in the village of Pansol, one of the districts in the capital with the highest numbers of drug offenders who surrendered to authorities.

For Father Orqueta of Santa Maria della Strada Parish, the challenge offers an opportunity for the church to show that it is doing its part in the government's war against drugs.

The priest said at the forefront of the church's concern is creating a "loving community" that will provide support for those who want to get out of addiction.

More than a million drug users and dealers have surrendered to authorities since President Rodrigo Duterte launched his campaign against narcotics.

But in the village of Pansol, out of the 331 who admitted that they were drug users only 18 have undergone rehabilitation since the campaign started in July last year.

Two psychiatric doctors sent by the Health Department to the village were only able to look into the cases of 20 of the 127 drug dependents who were set for assessment.

Various human rights groups have repeatedly condemned the drug-related killings in recent months instead of a more focused rehabilitation program for drug users.

Almost 8,000 suspected drug users and dealers have died in the past eight months either during police operations or at the hands of self-styled anti-illegal drugs vigilantes.

Aware of the inadequacy of the government program, Father Orqueta spearheaded a parish program to help not only the addicts but also their families.

"[We are] focused on the psycho-spiritual welfare of these surrenderees," said the priest.

On March 25, government and religious leaders launched a project that links church and government initiatives in the anti-narcotics drive in Pansol.

While the government focuses on counseling drug dependents, Father Orqueta and his group attend to the families.

"I hope that through this program the addicts and their families will have a support system," said the priest.

Kay Vardeleon, a psychologist who helps the program, said they want to ensure that families of recovering addicts will also be "part of the recovery process."

"Addiction is a family disease, it changes the family," she said. "Recovery must include the family," added Vadeleon.

"It takes a lot of practice and it will not be easy," she said.

But Father Orqueta said the church is ready to serve as a care group for families.

"We will strive to provide a support system through the basic ecclesial community," said the priest. He said they are ready for the long haul.

"As long as there is a need and as long as we have the capacity, we will strive to help," said the priest.