Policemen fired teargas and used a police van to ram into protesting tribal people and activists outside U.S. Embassy 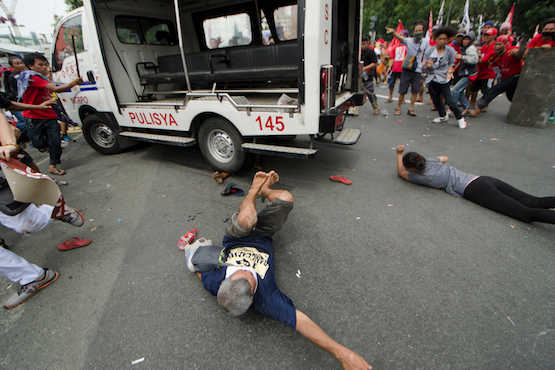 A police van rams into protesters and runs over protesters, mostly tribal people, outside the U.S. Embassy in Manila on Oct. 19. At least 50 people were reported hurt during the incident. (Photo by Rob Reyes)

Philippine church leaders condemned the violent dispersal of a demonstration against the continued presence of American troops in the Philippines on Oct. 19.

At least 50 people were hurt when the protest rally outside the U.S. Embassy in Manila turned violent.

Policemen fired teargas and used a police van to ram into protesting tribal people and activists. At least 31 protesters, including some of their leaders, were later arrested.

The protesters, led by the newly formed alliance of tribal minority groups, were about to wrap up their demonstration when policemen started dispersing them.

"The action of the police was very disturbing and abnormal," said Archbishop Emeritus Oscar Cruz, former head of the bishops' conference.

The prelate said the incident showed the Philippine authorities' lack of respect for human life.

In a statement, the Philippine National Police said the violent dispersal was "unfortunate" and an investigation would try to determine if the riot policemen followed crowd-control procedures.

Investigators will also evaluate criminal and civil liabilities of the protesters and their leader for an alleged illegal mass assembly.

'What led the police to act violently?'

The protesters, who were part of a national caravan of some 6,000 tribal people, were demanding for the pullout of American troops especially in the southern region of Mindanao.

The tribal people are in Manila this week to dramatize their call to drop trumped-up charges against some 200 tribal rights advocates and to urge the government to stop abuses against tribal people.

Father Edwin Gariguez, head of the social action secretariat of the Catholic bishops' conference said that there is no justification for the police action outside the U.S. Embassy.

"The police should assess its ranks," said Father Gariguez. "The protesters were not about to enter the embassy, so why disperse them violently," he added.

Father Rex Reyes, secretary general of the National Council of Churches in the Philippines, called for a thorough investigation of the incident.

"What led the police to act violently? Is it the prevailing mindset of our police officers now?" said the Protestant church leader.

The Rural Missionaries of the Philippines, an organization of Catholic missionaries working in tribal communities, said that it was "a shame to see Filipino state forces brutally attacking fellow Filipino protesters in defense of a foreign emblem."

In a statement, the missionaries said the tribal people who joined the demonstration "were not there to do war ... They were there to express in a symbolic manner their outrage over their situation."

Human Rights Watch reports that indigenous groups often bear the brunt of human rights violations by state security forces in the Philippines, especially in areas with mining and plantation interests.

With no official comment from the Philippine military or the U.S., it is difficult to determine how many American troops are currently in the country.

U.S. forces have long been reported to be present in parts of the southern region of Mindanao, including the Zamboanga Peninsula where the Abu Sayyaf Islamic militant group is based.

Any U.S. military presence in the Philippines is part of the "Enhanced Defense Cooperation Agreement," an agreement between the U.S. and the Philippines that was intended to bolster the U.S.-Philippine alliance.

However tough-talking President Rodrigo Duterte, who took office in June 30, has said he would devise a new policy. Duterte has further indicated that he wants U.S. military out of his country and that he will seek to form links with both China and Russia.