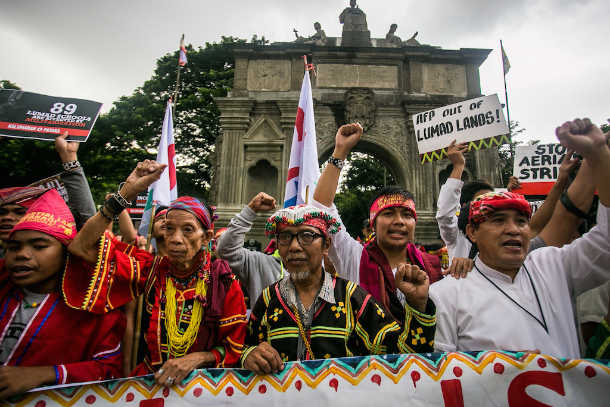 In this file photo, Church members and clergy are shown supporting tribal people from Mindanao in Manila, the Philippines during a march of solidarity in September 2017. (Photo by Mark Saludes/ucanews.com)

Church groups in the Philippines marked this year's "Indigenous Peoples Sunday" on Oct. 14 with symbolic rituals signifying their commitment to "accompany" or support tribal people in the country.

At the National Shrine of Our Mother of Perpetual Help, representatives of displaced tribal people from the southern Philippines spoke to churchgoers during a Mass.

"It is the mission of the church to amplify the voice of the oppressed," said Redemptorist priest Teodulo Holgado. "It is our duty to provide spaces for them to speak and be heard."

The priest said tribal people in the Philippines are the "most marginalized sector ... because people do not understand their plight," adding that people have largely remained silent regarding attacks on tribal communities.

Bishop Antonio Ablon of the Philippine Independent Church, who has been tagged as a communist because of his work with tribal communities, said there is no reason to back off or be cowed.

"We are not committing a crime by serving the tribal people," said the prelate. He accused the Philippine military of attacking the church "because of our ministry for tribal people."

Rommel Linatoc of the National Council of Churches in the Philippines said, "being silent and complacent about the plight of tribal people is no longer an option."

Human rights group Karapatan reported earlier that at least five tribal people and peasant leaders have been arrested since the start of October due to their alleged links to communist rebels.

In 1978 the Catholic Bishops' Conference of the Philippines declared every second Sunday of October as Tribal Filipino Sunday.