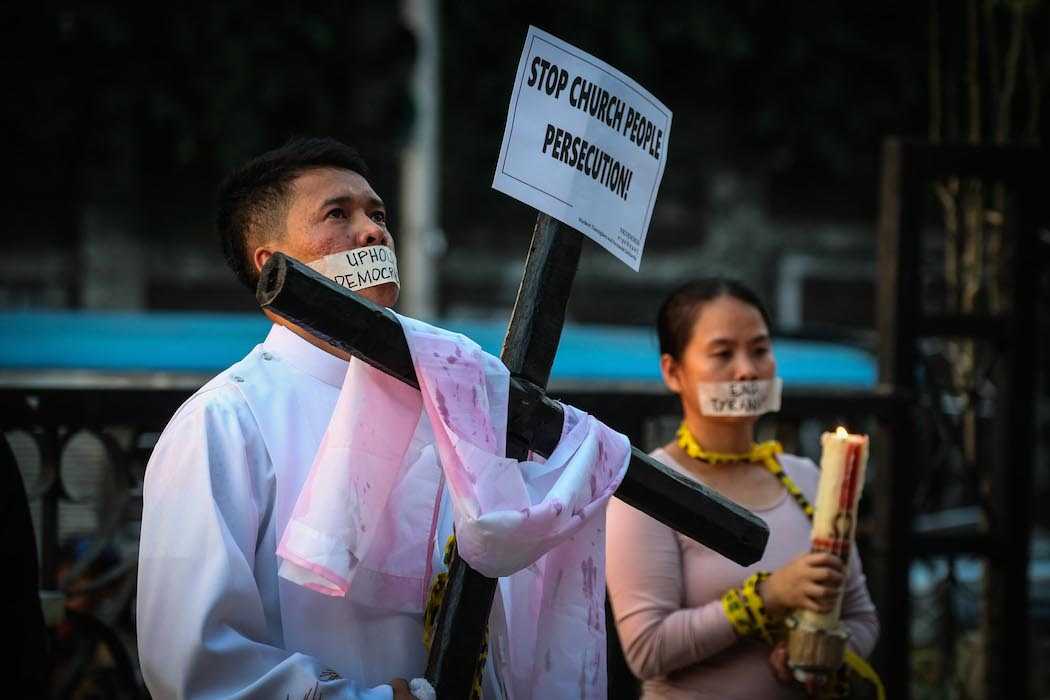 Priests, nuns, and seminarians stage a candle-lit prayer rally on May 17 to protest against what they described were the "tyrannical tendencies" of Philippine President Rodrigo Duterte. (Photo by Jire Carreon/ucanews.com)

Priests, nuns, and seminarians staged a candle-lit prayer rally on May 17 to protest against what they called the "tyrannical tendencies" of Philippine President Rodrigo Duterte.

The protest came days after Cardinal Luis Antonio Tagle of Manila released a letter to parishes warning that the Philippines is "facing a crisis of truth."

The Manila prelate noted that even Philippine legal experts have "given us conflicting interpretations on basic questions of law."

Cardinal Tagle issued the letter to priests and religious in his archdiocese days after the Philippine Supreme Court ousted the country's chief justice.

The court decision has been widely criticized by various groups, including civil society organizations and Catholic Church leaders.

Bishop Arturo Bastes of Sorsogon said the removal of Chief Justice Maria Lourdes Sereno could be the start of "another dark period in the country's history."

"A real dictatorship of a strong man is emerging," said the prelate, adding that "more controversial issues are surely coming."

He said the court decision "is the most shameful act in the history of the Philippine judiciary."

Cardinal Tagle said the "crisis of truth" has already resulted in "suspicion, mistrust, and fragmentation."

"Partisan politics has turned into political tribalization. The common good is one of the first casualties," the Manila prelate said.

Duterte's critics accused the president of masterminding the ouster of the chief justice who has been critical of the government's deadly crackdown on alleged drug addicts and dealers.

At the protest outside a Catholic seminary in Manila, nuns and seminarians said they were "deeply bothered" with the way the president flip-flops in his statements, especially on national issues.

Early last week, Duterte denied having a hand in Sereno's ouster, even saying he was ready to resign if proven otherwise.

In previous pronouncements, the Philippine president declared himself the chief justice's "enemy" and vowed to throw her out of the Supreme Court.

"This is not the first time he's made contradictory and confusing statements," said Brother Carl Philip Leyson, spokesman of the seminarians' group Nicodemus Solidarity.

The student for the priesthood said Duterte's work in his nearly two years in office "fall short of his campaign promises, especially on issues that greatly affect the poor."

The protesters demanded "sobriety and sound mindedness" from the president.

"We could do no less but to express deeply in our everyday prayers and supplications together with solidarity to victims a hope to an end to these hostilities," said the seminarians in a statement.

Cardinal Tagle, meanwhile, said the Philippines needs a "renewed outpouring of the Holy Spirit" as he declared May 20 to 31 as days of prayer, fasting and action "for truth and the common good."

"We accompany our prayer with fasting," said the prelate, adding that through fasting "we redirect our focus from ourselves and our groups to the community."

The cardinal also encouraged parishes, convents and schools to organize "feasts of truth and love" up to the end of the month.