Time to work for a 'productive environment and climate justice' is now, activists say 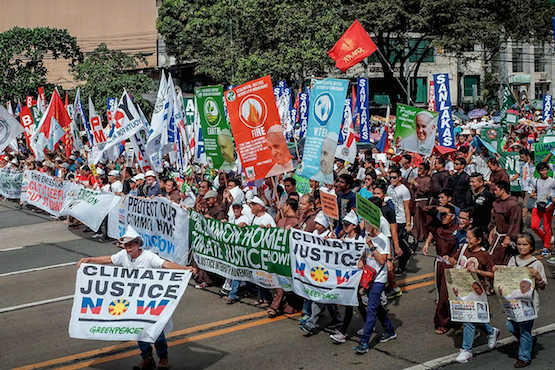 Church groups in the Philippines called on environmental advocates to seriously work for a "productive environment and climate justice" to address the roots of global warming and to bring about strategic and lasting solutions.

"People rise up, speak out and take concrete actions," read the March 16 statement from the group Stewards of Creation.

The Stewards of Creation noted that the Philippines has been on the receiving end of extreme weather conditions resulting in super typhoons and long droughts.

In the 2016 Climate Change Vulnerability Index, released by risk analysis company Verisk Maplecroft, the Philippines ranked 13th among the most climate-vulnerable countries.

With the onslaught of this year's dry season, the country expects crop losses and lower livestock and poultry production.

Jose Arnel Aguilar, spokesman of Stewards of Creation, noted that world leaders have failed to address the root causes of climate change.

"After more than two decades of climate summits ... the poorest and most vulnerable people remain at the margins, experiencing not only an inconvenient truth but a harsh and dangerous reality," said Aguilar.

In the central Philippine city of Cebu, environmental groups band with the church and educational institutions to amplify their call for discussion of environmental agendas during the election campaigns of presidential candidates for this year's elections.

The Concerned Cebuanos for the Environment, a newly formed group, said the environmental issue is an "urgent and important cornerstone platform and agenda."

"It's high time that politicians prioritize a green agenda and ensure implementation," said Sister Virgie Ligaray of the Association of Women Religious of Cebu.