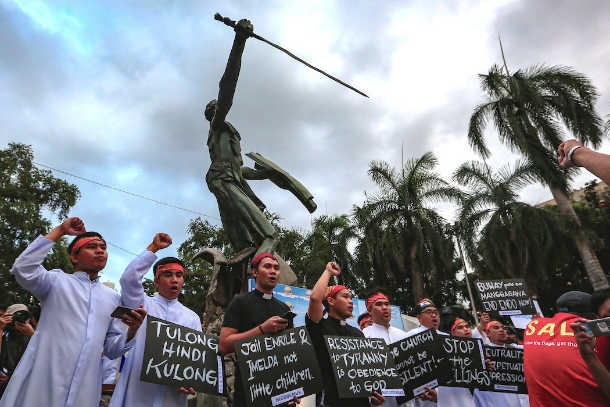 Catholic and Protestant groups hold a demonstration in Manila on Jan. 25 to show unity against what they described as attacks on the Church. (Photo by Jire Carreon)

Various religious groups took to the streets of Manila on Jan. 25, to denounce what they claimed was a campaign being waged against the church, primarily by Philippine President Rodrigo Duterte.

An estimated 3,000 Catholic and Protestants formed a "human chain" and lit candles to profess their "unity in faith and action."

They said they had gathered "to declare that our God is not stupid."

In a statement, the groups said the "sneers, false testimonies, repugnant stories and outright lies" of Duterte have "offend[ed] our hearts and human sensibilities."

Ever since he took office in 2016, Duterte has repeatedly attacked Catholic Church leaders, even questioning church teachings and calling God "stupid."

In recent weeks, the president went as far as urging people to either rob or kill bishops.

At least 20,000 suspected drug users and dealers have reportedly been killed in the government's two-year old anti-narcotics campaign.

Manila Auxiliary Bishop Broderick Pabillo said people have to "speak up in one voice against injustice and oppression."

"This day invites us to walk together and defend Christianity," said the prelate.

Nardy Sabino, secretary-general of the Promotion of Church Peoples' Response, said the attacks have to stop.

"They will not stop if we do not make [the president] stop," said the leader of the ecumenical church group.

"The Christian community has the strongest voice.... We want to show our strength, not just in numbers but also in our devotion to hold the line, stand our ground, and protect our faith," he said.

Bishop Rex Reyes of the Ecumenical Bishops' Forum said church leaders were being ridiculed because they side with the poorest sectors of society.

"The forces that united us here are injustice, abuse of power, and poverty [and] we look at these issues from the perspective of our faith," said Bishop Joseph Agpaoa of the United Church of Christ in the Philippines.

The prelate said Protestants are "in solidarity" with Filipino Catholics because "we are all part of the Universal Church."

Among the groups spearheading the event were the Episcopal Commission on the Laity of the Catholic bishops' conference, the National Council of Churches in the Philippines, and the Promotion of Church People's Response.