A Philippine congressional body has found "sufficient grounds" to continue with impeachment proceedings against the country's chief justice.

The House justice committee, dominated by allies of Philippine President Rodrigo Duterte voted on Oct. 5 to proceed with more detailed discussions of a complaint against Chief Justice Maria Lourdes Sereno.

The impeachment complaint filed against Sereno by a private lawyer listed 27 grounds for her impeachment that included culpable violation of the Constitution, betrayal of public trust, graft, and other crimes.

In his complaint, lawyer Larry Gadon alleged that Sereno bought an overpriced car worth at least US$100,000 that she failed to declare in her statement of assets.

She also reportedly failed to declare "exorbitant lawyer's fees" amounting to US$745,000 that she collected and travel allowances.

"Sufficiency in grounds means that, necessarily, these should be unlawful or illegal acts and they are of such nature that they would strike at the very core of the essence of government," said the lawyer.

A leading Catholic bishop, however, called the impeachment case against Sereno a "waste of time and taxpayers money" because it would not be "fair and just."

Bishop Ruperto Santos of Balanga said the impeachment attempt "is a numbers game" that capitalizes on the majority and the president's "whims and political party." Philippine bishops call for government to purge itself amid graft scandal 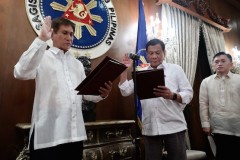 On Oct. 4, Duterte accused Sereno of working with a senator — Antonio Trillanes — who accused the president of racking up more than 2 billion pesos (US$39.2 million) in bank transactions from 2006 to 2015.

Bishop Santos said the country has already witnessed how the impeachment process "can be abused and misused by a sitting president who controls Congress."

"We witnessed this biased, abusive, and revengeful use of impeachment with [the Chief Justice Renato] Corona case," said Bishop Santos.

Corona, the 23rd chief justice of the Philippine Supreme Court, was impeached in 2011 for failing to disclose his assets, liabilities, and net worth.