Cardinal José Advincula of Manila has tested positive for COVID-19 and is in quarantine, said the Archdiocese of Manila.

In a Sept. 17 announcement, the archdiocese said the cardinal had a slight fever but no other symptoms.

While observing strict protocols, doctors are monitoring the cardinal's health, the statement said.

The archdiocese also asked for prayers for the cardinal and all people who are sick with COVID-19.

Cardinal Advincula, 69, was installed as archbishop of Manila, the largest diocese in the Philippines, June 24. He has been a human rights advocate and promoter of strong families throughout his years as a priest, bishop and cardinal. 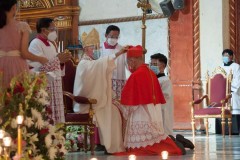