A father with his children on a bicycle crosses an almost empty road in Manila during the Covid-19 lockdown in the Philippine capital. (Photo: Ted Aljibe/AFP)

Health authorities in Manila have begun installing swabbing booths around the Philippine capital as the government prepares mass testing for Covid-19.

Quezon City and Makati City announced on April 7 that swabbing booths were being set up in major hospitals so that health workers can avoid further exposure to the coronavirus. The project also aims to have a more systematic and efficient way of conducting testing on almost 500 patients per day at each booth.

The swabbing booths are located at government hospitals with the most number of “persons under investigation” of having contracted the virus. These medical facilities are still accepting Covid-19 patients and include Quezon City General Hospital, Novaliches District Hospital and Rosario Maclang Baustista General Hospital.

“With the help of these booths, we will surely avoid additional exposure of our health workers [to Covid-19] and it will save hospitals on using personal protective equipment,” according to Quezon City’s Public Information Office.

Residents have welcomed the move. “At least we are beginning to see aid from the government. We hope to see more booths installed so that more patients can be tested,” Marlon Francisco, a jeepney driver, told UCA news.

Some, however, raised concerns about the manner in which the tests will be conducted. “We are seven in our family, so we hope they will prioritize the poor because we are the ones who cannot afford to buy private test kits. Since there are seven in the house, it would be really scary if one us was Covid-positive,” said Margarita Morato, a laundrywoman.

Meanwhile, the Catholic Bishops’ Conference of the Philippines (CBCP) has called for the simultaneous ringing of church bells in all Philippine dioceses at 3pm on April 8.

In an April 7 circular signed by CBCP president Archbishop Romulo Valles, the ringing of bells is a response to a request by the Philippine government led by the Inter-Agency Task Force on the Management of Emerging Infectious Diseases to signal the start of a televised interfaith prayer.

“It will be comforting and encouraging for our people when they sense and observe that a spirit of unity and working together is there in these trying times,” Valles wrote in the circular.

As of April 7, the Philippines had recorded 3,764 Covid-19 cases with 177 deaths, according to government figures. 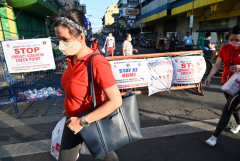