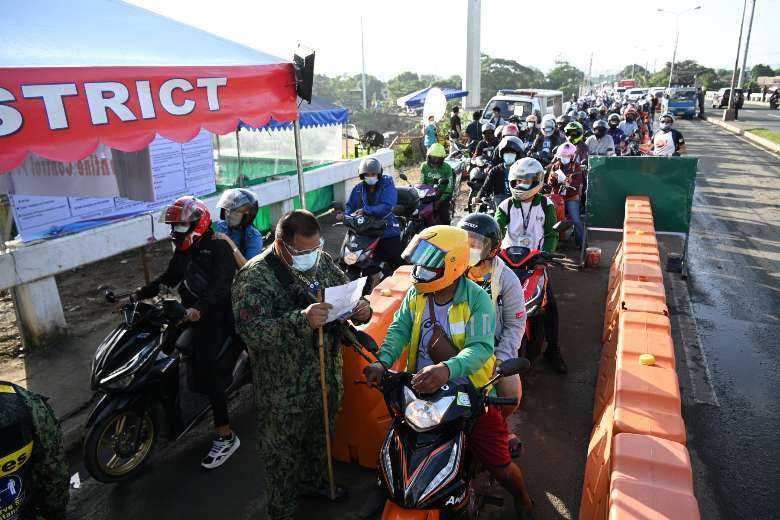 Policemen check documents of motorists traveling from nearby Rizal province at a border checkpoint in Quezon City, suburban Manila, on Aug. 6 after authorities imposed another lockdown in the metropolis. (Photo: AFP)

The Philippine capital Manila went into a two-week lockdown on Aug. 6 to slow the spread of the highly contagious Delta variant of Covid-19 and ease pressure on hospitals and other health facilities.

Long traffic queues formed across the city of 13 million as police inspected vehicles at checkpoints to ensure only essential workers were on the road.

Experts warned earlier that a surge in Delta cases could overwhelm the already stretched health system if stricter restrictions were not introduced.

The tightened restrictions ordered last week was expanded on Aug. 5 to include neighboring Laguna province and in other regions where coronavirus infections have spiked.

The Philippines has detected more than 330 Delta cases in recent weeks raising fears the strain could wreak havoc as it has in nearby countries.

Successive lockdowns and other restrictions, including a ban on children going outdoors, have shattered the economy and left millions jobless.

If you go out, I will tell the police to bring you home. You will be escorted back to your house because you are a walking spreader

There are concerns the new lockdown will deepen the economic misery, with government assistance limited to 4,000 pesos (US$80) per household.

Only essential businesses and workers can continue operating for the next two weeks. Outdoor exercise is allowed but an eight-hour nighttime curfew is in place.

Fears that unvaccinated people would not be allowed outside or receive government help during the lockdown saw thousands flock to several Covid vaccine centers in Manila on Aug. 5.

A crowd descended on one center at a shopping mall as early as 5am, ignoring all physical distancing and other health protocols and raising fears many people would be infected. Witnesses described the scene as akin to a stampede.

Similar scenes were reported at other vaccination centers in the capital.

“We want government aid. My husband will not have work during the lockdown, so I am here to get an anti-Covid shot to qualify for financial assistance,” said Rosalinda Guemo, one of those gathered at the mall before dawn.

The rush to get jabbed came after President Rodrigo Duterte said last week that people who do not want to be vaccinated should stay home.

"If you go out, I will tell the police to bring you home. You will be escorted back to your house because you are a walking spreader," Duterte said.

Guemo told reporters she received a text message from a purported government official warning her that if her family was not vaccinated, they would not receive 3,000 pesos ($60) in aid.

“That’s what we were told, so we believed it. Three thousand pesos is still a lot for us to buy rice and groceries during that period,” she said.

Others were told that unvaccinated people would be confined to their homes.

“I wanted the vaccine because President Duterte had said that the unvaccinated would not be allowed to go out. I also heard it from local officials. But I need to work because I am a garbage collector. I need to earn,” Karlo Jesua told reporters.

"We are not imposing any prohibitions on people who are not vaccinated. We are merely asking that, now that the vaccine is there, everyone should get a jab," he said.

Just over 10 million Filipinos are now fully vaccinated, about 9 percent of the population.