Penitent crucifixions planned for this Good Friday may be 'spiritual vanity' 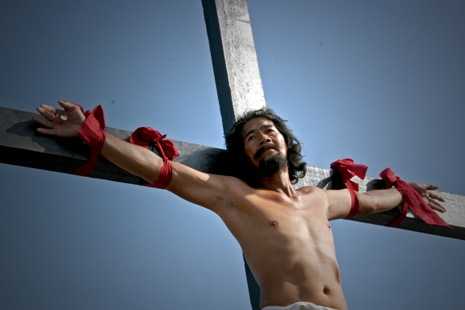 A penitent is nailed on a cross in the province of Pampanga. (Photo by Joe Torres)

The country's Catholic bishops on Wednesday warned penitents not to subject themselves to crucifixion or self-flagellation during the observance of Good Friday.

Archbishop Socrates Villegas of Lingayen-Dagupan, president of the bishops' conference said that instead of subjecting themselves to "extreme forms" of sacrifice, Catholics should instead show more "love for others". "The question is, if you nail yourself on the cross, will it increase your love for your neighbor?" the prelate said.

"If what you do makes you love others more, then it is pleasing to God. But if you do it for photographs, for you to be famous, then that becomes spiritual vanity," he said.

"There are other forms of sacrifice and suffering that would lead to real conversion," he said.

The Health Department supported the bishops' call for penitents to stop scourging themselves.

Assistant Health Secretary Eric Tayag said flagellants are at risk of developing tetanus because of cuts exposed to dust and other elements.

At least 20 penitents are scheduled to be nailed on three crosses in the City of San Fernando, Pampanga province, on Good Friday.

Holy Week in the Philippines, regarded as one of the busiest weeks of the year for Filipinos, is observed with much color and pageantry.

Penitents subject themselves to crucifixion or self-flagellation on Holy Thursday and Good Friday to atone for their sins and give thanks to God for the blessings they received during the year.

The crucifixions of penitents on Good Friday in the province of Pampanga, and the Spanish-influenced religious rituals around the country, such as the procession of religious images, have become tourist attractions.

Most businesses in the country close until Holy Saturday while radio and television stations sign off or play religious music or films.