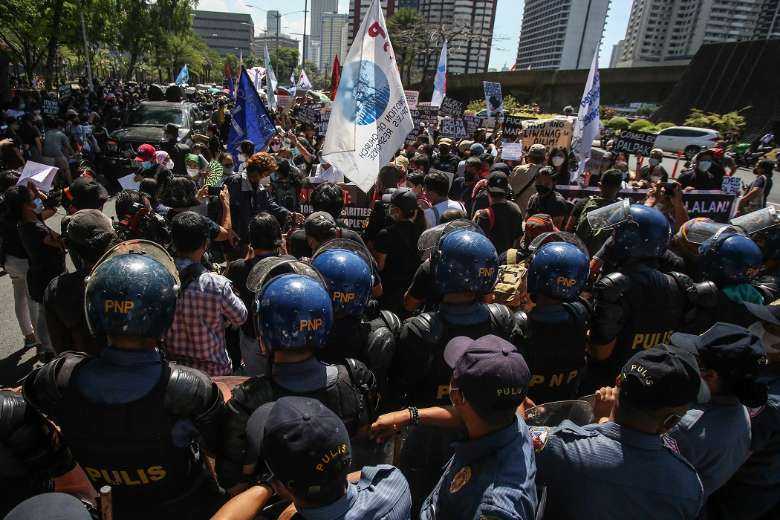 Protesters stage a demonstration outside the Cultural Center of the Philippines in Manila on May 13 to protest the alleged unpreparedness of the Commission on Elections for the presidential election. (Photo: AFP)

Two senior bishops and a Catholic university in the Philippines have warned supporters of defeated presidential candidate Leonor “Leni Robredo” not to sow unrest by protesting against election results that saw Ferdinand “Bongbong” Marcos Jr win by a landslide.

The call came as hundreds of people, many of whom were Robredo supporters, descended on the Cultural Center of the Philippines in Manila on May 13 to protest against alleged election fraud and other poll irregularities.

Many complained that the Commission on Elections was ill-prepared for the election, that vote-counting machines were destroyed and that millions of people were unable to vote.

Bishops’ conference president Bishop Pablo Virgilio David of Kalookan and Archbishop Socrates Villegas of Lingayen-Dagupan called on Robredo's supporters to continue doing what is good despite her overwhelming defeat in the May 9 polls.

“Our grief and our hurt are not enough reasons to excuse us from serving the people,” Archbishop Villegas told reporters on May 12.

“We must learn not to give up even on people who have been seduced by darkness. The real challenge therefore for the redeemer is how to get people to see the light or know the truth"

He called on Robredo's supporters to “reach out to others,” particularly those who supported Marcos Jr, as part of being Catholic.

Bishop David likewise urged Robredo’s supporters to be more tolerant of those who did not share their view on governance. He was referring to social media posts from Robredo supporters calling Marcos voters “stupid” with no sense of history.

They were in turn alluding to Marcos supporters believing social media propaganda that the “golden age” of Philippine history was during the repressive martial law years of Marcos Sr — a falsehood that Bishop David and the bishops’ conference criticized in a pastoral letter in February.

“We must learn not to give up even on people who have been seduced by darkness. The real challenge therefore for the redeemer is how to get people to see the light or know the truth,” Bishop David said during a Mass in Caloocan City, Manila.

He reminded Catholics to avoid discriminatory remarks and to be more politically inclusive.

“It is not as simple as telling them ‘You’re wrong, I am right.’ They will only become defensive or may even turn offensive because they feel that they are being attacked,” he said.

“How would you expect the agents of darkness to favor the principles or values of honesty, transparency or accountability? Evil is like a fungus that thrives in dark and secret places.”

“Fellow Ateneans, let us take this opportunity to rebuild our heavily fractured society. Use this moment as an opportunity to begin the arduous task of making whole again our heavily damaged democracy,” Ateneo president and Jesuit Father Bobby Yap said in a statement.

“We all know it will be tough, painful and exhausting, but always remember that nation building is a never-ending exercise that we all must take part in.”