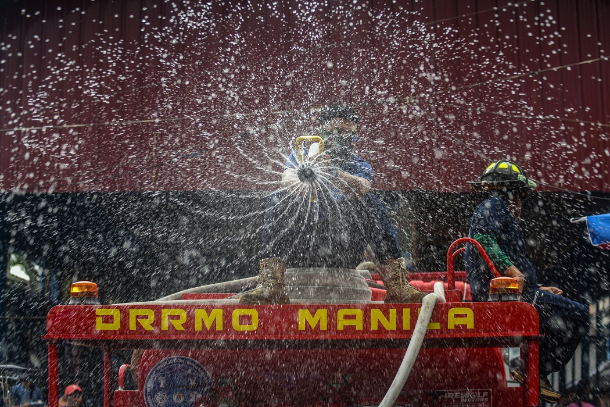 Firemen spray disinfectant to prevent the spread of the coronavirus at a market in Manila on March 11. (Photo: Maria Tan/AFP)

The Catholic Bishops' Conference of the Philippines (CBCP) has issued updated guidelines to be implemented in parishes during Mass and other public worship in response to the spread of the 2019 novel coronavirus or Covid-19.

Aside from issuing an oratio emperata or obligatory prayer against the spread of the virus to be recited during “all weekday and Sunday Masses, after the Holy Communion, kneeling down,” the CBCP has also taken on board advisories from the Department of Health, which has declared a state of public health emergency in the country.

Parishes are required to continue distributing Communion in the hand, while ministers, both ordained and lay, are asked to wear face masks when giving the sacrament.

Clergy and worshipers are also called upon to clean statues regularly and refrain from touching or kissing them, and not to touch hands during the singing or recitation of the “Our Father.”

The bishops added that they were “strongly urged” by health authorities to cancel, postpone or suspend large gatherings.

They advise that each local ordinary must use their discretion on this matter but make sure they place priority on the safety and health of the public when deciding.

As of March 12, there were 49 confirmed Covid-19 cases in the Philippines, according to authorities who also confirmed a second death from the highly contagious disease.

The victim was a 67-year-old woman who began displaying virus symptoms on Feb. 29, doctors said, adding that she died on March 11.

Meanwhile, people are panic buying, which has resulted in a shortage of face masks and hand sanitizers. Bishop warns Filipinos not to be sidetracked by virus fears Many have also expressed fears that President Rodrigo Duterte will soon issue a lockdown in Manile after government buildings including the Senate and the Government Service Insurance System offices were shut after some visitors tested positive for the virus.

Senators and their staff are also under self-quarantine to prevent the spread of the virus.