Philippine bishops take stand against use of fossil fuels 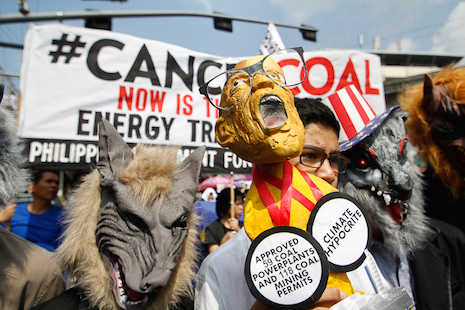 Environmental activist groups march in Manila in October to call for a halt to the approval of more coal power plants in the Philippines. (Photo by A.C. Dimatatac)

Catholic church leaders in the Philippines have made clear their stand against the use of dirty fuel in a statement issued in the wake of the Paris Conference on Climate Change.

"The church will oppose the opening of new coal-fired power plants and advocates the denial of government permits and licenses to coal mines," read a statement released by the  bishops Dec. 18.

There are 14 coal-fired power plants operating in the Philippines, accounting for 37 percent of the country's total power generation mix. At least 18 coal plant-constructions and expansions are in the pipeline.

The Philippine Movement for Climate Justice said President Benigno Aquino has approved the building of 59 coal power plants and has issued 118 coal-mining permits in the past five years.

Archbishop Socrates Villegas of Lingayen-Dagupan, president of the Philippine bishops' conference, reiterated an earlier pledge made by the bishops that the church "will do its share" in protecting the environment.

The church leader called on all Filipinos "to make local threats” to global warming and climate change “a matter of community discernment."

Archbishop Villegas said actions in response to threats to the environment should also be "a matter of community resolve."

In their statement, the bishops urged priests and church workers to limit the number of vehicles, use of electricity, water, and even "laudable livelihood efforts that nevertheless pose a threat to the environment."

Philippine environmental activists called for a global coal moratorium during the International Rights of Nature Tribunal, held in parallel with the U.N. climate change conference in Paris early this month.

Clemente Bautista, national coordinator of the Kalikasan People's Network for the Environment, said a moratorium on coal mining in Southeast Asia will keep 19 billion tons of coal under the ground and preserve millions of hectares of forests.

In their statement, the bishops said "the right to a healthful ecology is a human right and must both be advocated and defended with the determination by which we stand by other human rights."

"The fact cannot be overstressed: It is often the case that the poor pay the price of the prosperity of the rich," said the bishops.