Catholic leaders say they are 'saddened and disturbed' by president's statements 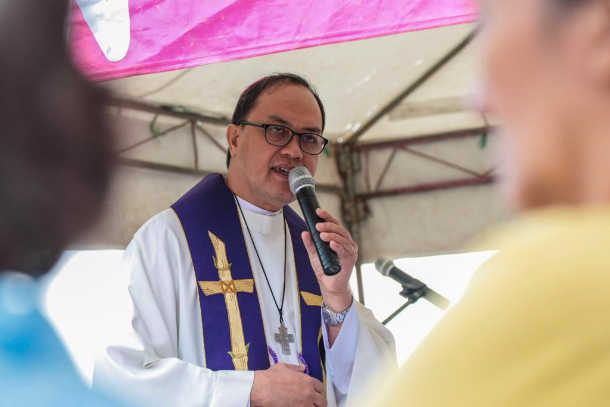 Bishop Pablo Virgilio David of Kalookan has been the target of President Rodrigo Duterte's most recent tirades. (Photo by Jire Carreon)

Philippine Catholic bishops are standing by Bishop Pablo Virgilio David of Kalookan after he was targeted by President Rodrigo Duterte's recent tirades.

Archbishop Romulo Valles, head of the the Catholic Bishops' Conference of the Philippines, said church leaders are "saddened and disturbed" by the president's recent statements.

The controversial president has accused the Kalookan prelate of giving church donations to his family. Duterte also said he thought the bishop might be into drugs and threatened him with hanging.

Archbishop Valles of Davao, a friend of Duterte, said he was surprised by the president's pronouncements "that allege that Bishop David had committed actions that question his integrity."

He added: "Bishop David has already answered clearly and equally all these allegations."

Archbishop Valles said the country's bishops can vouch that Bishop David, a Bible scholar and critic of Duterte's anti-narcotics war, is a "very good bishop, a dedicated shepherd and father of his flock."

"He is very passionate in his ministry, bringing mercy and compassion, especially to the poor and suffering among his people," he said.

In a circular issued on Nov. 28, Archbishop Valles appealed for prayers for the Kalookan bishop to have "more strength as well as calmness and peace in this difficult situation."

Bishop David is vice-president of the bishops' conference and may become its next president after Archbishop Valles.

The bishop earlier called Duterte a "very sick man" after he dubbed Catholic saints "fools and drunkards." Bishop David has also complained that the  government's war on drugs has turned his diocese into a "killing field."

He said he was deeply bothered by the spate of drug-related killings in his jurisdiction north of the capital Manila that he has "lost count" already of how many have died.

He became more vocal in criticizing Duterte's policy after the killing of a 17-year-old student in the Diocese of Kalookan in August 2017. On Nov. 29, a court found three policemen guilty of the murder of Kian Loyd delos Santos.

Bishop David welcomed the court decision, saying that "it is one good sign that the justice system in the country still works."

"This decision will hopefully embolden families of the many other slain victims," said the prelate, adding that other witnesses in other cases might be encouraged by the court decision.

In February 2017, the bishops' conference issued a strongly worded pastoral letter to remind Catholic faithful that "to consent and keep silent in front of evil is to be an accomplice to it."