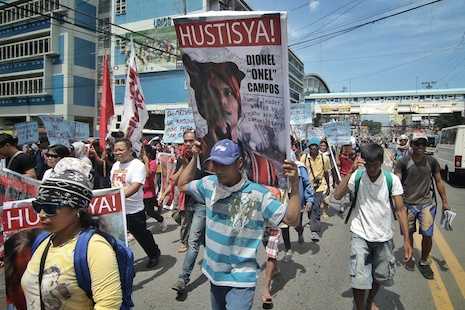 Philippine Catholic bishops have denounced the government's reported use of militia groups linked to the killings of tribal leaders in the southern part of the country in recent weeks.

In a strongly worded statement, the bishops noted that the government was using paramilitary groups for "counter-insurgency [and] counter-rebellion maneuvers."

"It is their association with the government that can be pernicious," said the statement, released to coincide with the funerals over the weekend of two tribal leaders and a school director who were allegedly murdered by members of the Magahat paramilitary group in Surigao del Sur province on Sept. 1.

As of Sept. 14, some 3,000 Manobo tribal people remained at a sports complex in Surigao del Sur's capital city of Tandag after fleeing their villages for fear of attacks by the Philippine army and paramilitary groups.

In their statement, the bishops noted that while members of paramilitary groups "act with the tacit consent, if not authority of state agents, they cannot be held to account for their actions by the regular channels of accountability and attribution."

The bishops said they are "disturbed profoundly by reports that national leaders have been quick to exonerate the militia group of wrongdoing" in the triple killings in Surigao del Sur on Sept. 1.

"This alarming eagerness to deny culpability does not augur well for truth and for justice," the bishops said in the statement signed by Archbishop Socrates Villegas of Lingayen-Dagupan, president of the bishops' conference.

The bishops said that statements made by government leaders even before an impartial investigation into the killings is done "suggest a refusal to hold accountable those to whom the [Philippine government] so eagerly extends its mantle of protection".

In a Sept. 13 statement, government spokesman Herminio Coloma Jr. said the Department of Justice would investigate the killings.

"We note the statement of the [bishops] on the killing of [indigenous peoples]," Coloma said. "The [Department of Justice] supports the call for an inter-agency probe into the incident," he added.

Meanwhile, an estimated 8,000 people attended the funeral of slain school director Emerito Samarca in his hometown of Butuan on Sept. 12.

"We will honor the deaths of our recent martyrs through our strong commitment to the truth," said the Unity for Tribal Organization, or Kasalo, in a statement.

"They [the Magahat militia] made a mistake in killing [Samarca, Campos and Sinzo] because instead of intimidating and silencing hundreds of us who directly witnessed the brutal killing ... many are crying for justice," the organization said in the statement.

A growing number of people and organizations have joined calls for justice for the killings and displacement of people in Mindanao.

"We hold the government of the Philippines responsible for these crimes, and we demand ... the immediate and total end of these killings," said the Congregation of the Most Holy Redeemer, also known as the Redemptorists, in a Sept. 14 statement.

The congregation expressed its "strongest opposition and denunciation for this continuing and escalating senseless killings."

The Philippine military has repeatedly denied a hand in killings and in organizing and arming paramilitary groups.

Rights group Karapatan says it has already brought to the attention of the United Nations Human Rights Council the killings in Surigao del Sur.

"We are asking the U.N. to investigate and recommend actions to the Philippine government on these issues," said Cristina Palabay, Karapatan secretary-general.