The Catholic Bishops’ Conference of the Philippines (CBCP) has pledged to comply with changes to the Roman liturgy set out in an apostolic letter issued recently by Pope Francis.

The apostolic letter, “Traditionis Custodes: On the use of the Roman Liturgy prior to the Reform of 1970,” was issued on July 16.

It called for the use of the Roman Missal edited by St. John XXIII in all Masses. The Roman Missal is the book that contains the prescribed prayers, chants and instructions for the celebration of Mass.

Pope Francis in his letter also advocated the use of liturgical books promulgated by St. Paul VI and St. John Paul II in conformity with the decrees of the Second Vatican Council.

The Philippine bishops promised their “perpetual” obedience to the pope and their unity with the Catholic Church by using the prescribed formats in Masses.

“We express our obedience to and communion with the Supreme Pontiff as he leads us in the realization of the unity of the Church by means of the proclamation of the Gospel and in a particular manner in the celebration of the Eucharist,” the bishops said in a CBCP pastoral letter issued on July 22.

The Holy Father expressed his desire to press on evermore in the constant search for ecclesial communion ... by having a uniform missal that is widely practiced by Catholics

CBCP president Archbishop Romulo Valles said the apostolic letter was the “fruit” of consultation with the bishops' conferences in 2020 and recommendations made by the Congregation for the Doctrine of the Faith.

“The Holy Father expressed his desire to press on evermore in the constant search for ecclesial communion ... by having a uniform missal that is widely practiced by Catholics,” he added.

Archbishop Valles said bishops are guardians of Catholic tradition and as such they must follow liturgical recommendations made by the pope.

“We reiterate the appeal of Pope Francis that every liturgy be celebrated with decorum and fidelity to the liturgical books promulgated after Vatican Council II, without the eccentricities … and that seminarians and new priests should be formed in the faithful observance of the prescriptions of the missal and liturgical books, in which is reflected the liturgical reform willed by Vatican Council II,” the bishops said. 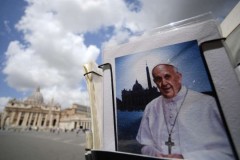 Vatican releases text of pope's letter on celebration of Mass

The prelates also urged Catholic clergymen to show fidelity to the pope by practicing the recommendations contained in the apostolic letter.

“We may have different opinions or favorites in terms of which liturgy to follow. But let us follow what the Holy Father has recommended … Unity in necessary things. Liberty in doubtful things. Charity in all things,” the bishops said.