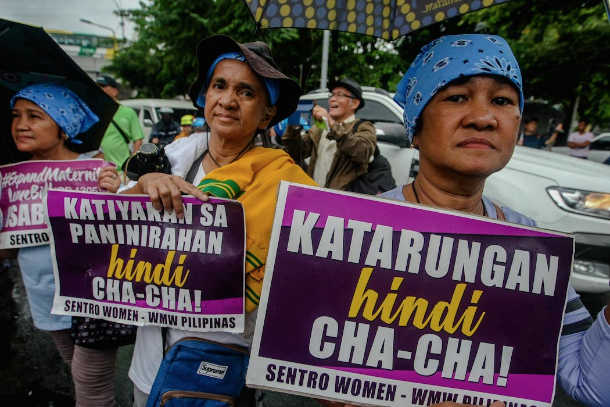 A group of women take part in a protest against proposed charter changes in Manila. (Photo by Jire Carreon)

Catholic bishops in the Philippines have voiced opposition to a proposed move to revise the constitution and adopt a federal form of government.

In a pastoral statement issued at the end of their bi-annual meeting on Jan. 28, church leaders called the proposal accepted by the Lower House of Congress an "insidious matter."

"It takes away the term limits for most elected officials and allows political dynasties to continue," read the statement titled "Seek the Common Good."

They noted that the proposed changes also open the country's resources up to foreign ownership and eventual control.

The bishops said the changes "are a self-serving attempt by current politicians to remain in power."

In December, the House of Representatives passed a resolution that seeks to introduce a federal system of government.

The proposal removes political reforms such as an anti-dynasty law and the need for a clear political party reform agenda that are part of the present constitution.

The proposed amendment also takes away an article in the constitution that recognizes social justice and human rights as the "highest priorities" of the state when enacting laws that would benefit Filipinos.

The bishops said the version of federalism proposed by the Lower House is "vague and would do away with the 2019 elections."

"We denounce any attempt to avoid the 2019 elections," said the bishops, adding that the right of the people to vote should not be removed.

The Philippines will hold midterm elections on May 13 for 12 seats in the Senate, all seats in the House of Representatives, and for all provincial and local-level elected positions.

Archbishop Romulo Valles of Davao, president of the bishops' conference, said the May elections were crucial because checks and balances in government "are being undermined."

In their statement, the bishops said voters need to elect public officials who are "principled, courageous and who have the common good as their main concern."

The Church leaders said lay groups should organize "discernment circles" to help the electorate know their candidates and choose those promoting the common good.

Archbishop Valles said bishops and priests will not be endorsing candidates, but lay people, may.

He said dioceses and parishes will be sponsoring "political education" sessions and continue cooperating with the Parish Pastoral Council for Responsible Voting watchdog.

"We are at a crucial moment of our history," said the bishops. "In our hands is the direction of our country. Let us be vigilant as to what is happening," they added.