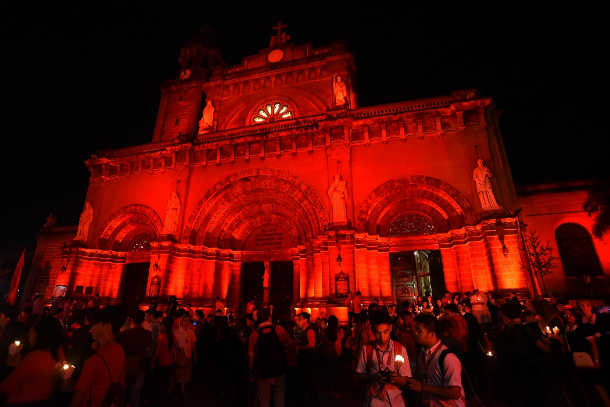 The facade of the Catholic cathedral in Manila is bathed in red light during the observance of Red Wednesday on Nov. 27 last year. (Photo: Angie de Silva)

The Catholic Bishops’ Conference of the Philippines has declared the "Red Wednesday" campaign an official church celebration.

Red Wednesday, a global campaign to encourage people to stand up for religious freedom, is promoted by the Aid to the Church in Need (ACN) and the group Christian Solidarity Worldwide.

The country's Catholic bishops have agreed to make the campaign an official Philippine Church celebration to raise awareness of the plight of persecuted Christians around the world."This formally makes Red Wednesday an official day of observance in all churches and Catholic institutions in the Philippines," said Jonathan Luciano, national director of ACN.ACN is an international Catholic pastoral aid organization, which each year offers financial support to more than 5,000 projects worldwide. It aims to help Christians in need wherever they are repressed or persecuted and prevented from living according to their faith.Luciano said the Philippines, the first to declare Red Wednesday as an official church celebration, has consistently supported ACN activities."We will do this, and we will continue to do this, for every Christian in need," said Luciano.More than 2,100 parishes across the Philippines joined last year's observance of Red Wednesday to show solidarity in the campaign against religious persecution. Church buildings and structures across the country were lit in red on Nov. 27 to mark the event. First organized in the United Kingdom in 2016, the Philippines first took part in the campaign in 2017.Red is the Christian color of martyrdom and studies have shown that Christians remain the most persecuted faith group in the world, particularly in the Middle East and Africa."May this serve as an inspiration to other countries as well, especially to nations like ours, which are of major concern when it comes to persecution," said Luciano.The country's Catholic bishops approved the official celebration on the first day of their plenary assembly in Manila on Jan. 25.From now on, Red Wednesday observance will be after Christ the King Sunday every year.