President Rodrigo Duterte greets Archbishop Romulo Valles of Davao during their meeting at the presidential palace on July 9. (Photo courtesy of the Presidential Communications Office)

The Philippine president showed signs of disdain toward the country's Catholic Church leaders before the campaign for the presidential elections.

When he declared he would run for president, Rodrigo Duterte cussed the pope for allegedly causing a traffic jam in Manila during his visit early that year.

Many laughed. Some kept silent because they knew that a visit by the pope, or by any other foreign dignitary or personality, always causes traffic in the congested capital.

President Duterte is now into his third year as the country's leader. When he delivered his State of the Nation address on July 23, his drum-beaters gloated about the lack of cussing in his speech.

But this has not been the case in recent weeks with the president not lacking in words against the church and its leaders.

The president's broadsides might have caused the bishops to awaken and issue the "pastoral exhortation" on July 9 that enumerated the country's ills under Duterte's presidency.

Early this year, Archbishop Romulo Valles of Davao, head of the bishops' conference and the president's friend, was optimistic about ties with the president.

"Communication lines are open" with the presidential palace, he said.

Later in the year, however, when the president called God stupid, offending many Catholics, some bishops decided they had had just about enough of the outspoken Duterte.

A senior prelate who had been silent for some time said he and his fellow bishops were left with no alternative but to issue stronger statements against the president's irresponsible language. 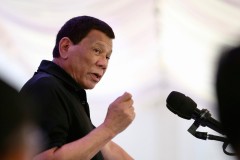 Another prelate wondered why Duterte had to attack the church and the bishops instead of just attending to issues like the rising cost of commodities, illegal drugs, among others.

The prelates also said government policies should not go against spiritual and moral principles.

When Duterte met Archbishop Valles after the release of the statement, the presidential palace announced a moratorium on criticism of the church.

But there seems to be no stopping Duterte. The day after, he again slammed the church and its leaders.

Can the bishops really stand up to Duterte? Can they rally the clergy and the faithful to answer the challenges thrown their way by the president?

Bringing the clergy together can solve only half of the problem. Bringing the faithful together is another problem.

During the reading of the bishops' pastoral exhortation, people listened. "There was some concern," one churchgoer said.

It's something surprising in the already highly secularized Philippine society wherein only a few go to church and listen to their priest.

Some would say that only Cardinal Luis Antonio Tagle of Manila could rally people if he decides to take the lead. But the cardinal seems to prefer silence and busy himself with churchy affairs.

There were those among the faithful who remember the days of the late Cardinal Jaime Sin and Cardinal Ricardo Vidal of Cebu who stood up to then strongman Ferdinand Marcos.

There are those who describe the current relationship between the country's church leaders and Duterte as "turbulent" and "stormy."

It is an understatement considering that prevailing social issues are likely to hound both the government and the church.

Melo Acuna has worked as a broadcast journalist for the past three decades. He has spent time with faith-based groups in various dioceses in the Philippines through his work as reporter, and later as station manager of church-run radio Veritas 846.